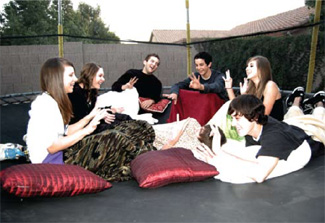 – by Walt Mueller
©2004, The Center for Parent/Youth Understanding

*This article originally appeared in Living With Teenagers magazine

Some of my greatest fifth grade memories involve those Friday night sleepovers me and the guys used to have at Stuart Hayman’s house. Stuart was my fifth grade classmate and he had the coolest parents in the world. Their high-end cool factor was fed by the fact that at least once every two months, they’d let Stu invite a handful of friends to spend the night. After finishing dinner at my house, I’d grab my sleeping bag, pillow, flashlight, and toothbrush and head out the door to walk up the street to the Hayman’s. During the walk, I’d excitedly anticipate an overnight experience made up of several important ingredients: we’d stay up late, we’d order pizza, we’d tell scary stories, and – best of all – there’d be no girls!

By the time I hit tenth grade, we were still doing the sleepover thing. The only difference was a couple of the ingredients had changed. We’d still stay up late and order pizza. But instead of telling scary stories, we’d talk about girls. And, if truth had been told, we usually lamented the fact that our overnight adventures were testosterone exclusive. Of course, any “plans” we might have were quickly thwarted by a unified parental front that clearly communicated, “There’ll be no girls!”

Over thirty years have passed and today’s “sleepover culture” doesn’t look anything at all like it did back then. Yes, kids still have sleepovers. But today’s teen culture has added the term “coed” to the sleepover equation. Coed sleepovers have become so commonplace that I’d be hard-pressed to find a community that hasn’t had them or a kid who hasn’t been invited to one. No, this doesn’t include the kids and communities where churches sponsor lock-ins or overnights. These traditional youth group events fall into an altogether different category. Instead, we’re talking about those coed sleepovers attended by just over half the teens surveyed in a recent Teen People magazine poll. These are the coed sleepovers that almost two-thirds of the respondents said are “more fun” than same-sex sleepovers.

There are many reasons why we shouldn’t be surprised. Our changing culture has created a climate ripe for the popularity of coed sleepovers. Parents are increasingly out-of-touch, naive, or permissive. Old standards have been forfeited and replaced by an ethical standard that lacks commonly held standards. Many teens are left to make plans and decisions for themselves without any parental input or guidance. Increasingly, our culture sees nothing wrong with premarital sexual activity. If that’s the case, it’s no wonder this isn’t even an issue for many. And in some cases, parents who erroneously assume that all kids are going to be sexually active condone the gatherings in an effort to provide kids a place to do whatever they plan on doing “safely.” Finally, it’s a sad fact that some parents just don’t care.

As a Christian parent who does care, what standards and guidelines should you follow in your efforts to point your kids in the right direction? Here are a few suggestions:

Second, be realistic about the dangers. My ears tend to perk up when my kids respond to my parental “badgering” – no matter what the activity – with “don’t worry Dad, nothing will happen.” Perhaps that’s true. But as a sinful and fallen human being, I’ve got a front-row seat looking into the human heart and condition. Coed sleepovers might turn out to be nothing more than innocent fun. But the temptations are real. To their credit, today’s youth culture is marked by many more cross-gender friendships. But it’s also marked by some alarming trends including “hooking up” (consensual sex between casual friends) and oral sex. I believe that coed sleepovers can easily be moral breakdowns waiting to happen. Eighty-three percent of the Teen People respondents reported that their peers were “fooling around” at coed slumber parties. Should we encourage and allow our kids to engage in “spiritual” Russian Roulette?

Third, use the Scriptures to both guide and justify your decision, and to warn your teens of the dangers that exist at coed sleepovers. No, I’m not talking about quoting “Children obey your parents” and “honor your father and mother.” Instead, start by describing the dangers, particularly those related to sexual temptation and sin. Then, lovingly communicate the seriousness with which you take your God-given responsibility to protect them from harm and provide for their well-being. Make sure they know that even if you trust them, you will still direct them away from situations where others might not be able to be trusted.

Finally, offer an alternative by finding a more positive and enjoyable experience to offer your teen in place of the coed slumber party.

Saying no to this disturbing new trend might not be the most enjoyable parenting experience you ever have. Chances are your directive won’t be welcomed with open arms. But it’s certainly worth it. And the boundaries – something all teens want and need – will be something your kids will someday thankfully come back to when they ponder their fondest childhood memories!