– by Walt Mueller
© 2006, The Center for Parent/Youth Understanding

I’ve been showing it to people since I first spotted it. It’s a photo that reveals many truths and draws a variety of responses. That’s what happens when you combine head and shoulders shots of four blonde, popular and attractive female teenage clones into one image. 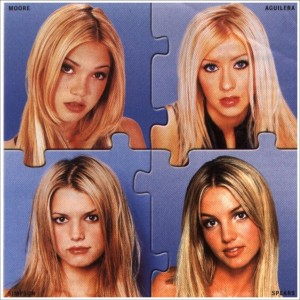 When I first spotted the photo in Entertainment Weekly in 1999, I felt validated. I had been saying for a long time that I believed somebody somewhere had come up with a fool-proof formula for creating young pop stars and dropping them successfully into the pre-teen world. After all, it had been happening since I was a kid when The Monkees burst onto the scene. Now there was visual proof to add to my arsenal of arguments. It was no coincidence that the four young ladies pictured in the photo not only looked identical with their long blonde hair, but they were jockeying with each other for first place in the race for young pop star supremacy. It was 1999, and Britney Spears, Christina Aguilera, Mandy Moore and Jessica Simpson were all following the cookie-cutter formula and experiencing different levels of success.

This was a marked and sudden change from the normal ‘90s music fare. The years ushered in with Nirvana’s 1991 arrival on the youth culture scene had been marked by music that was deeper, more thoughtful, angst-ridden and from the heart. It was a sound that topped the charts with music reflecting the hopeless yearnings and deep hurts of the emerging generations. While the frothy pop-dance music of the late ‘80s (think Michael Jackson, Janet Jackson, Paula Abdul, etc.) continued to connect with a large audience of younger teens and pre-teen adolescents, it looked like the changing spirit of the times would preclude any possibility of a pop/dance revival as the preferred genre at the top of the charts.

Then came 1999—a surprising year in the music industry. The choreographed and market-driven sights and sounds of pop/dance experienced an abrupt resurgence, making the genre more popular than ever. The growing and economically powerful generation of millennial kids was coming of age. Suddenly, the popular music industry was driven by the wants of pre-teens and young adolescents who had TVs and radios in their rooms, and lots of money in their pockets. MTV fed them what they hungered for—an almost never-ending dose of boy band visual/aural clones and young female stars, all not much older than their fans. On the female side, the sales and popularity winner who separated herself from the other young girls in the photo was Britney Spears, who finished the year at #2 on the sales charts, just one spot behind The Backstreet Boys.

In an effort to help parents and youth workers understand the Britney Spears phenomenon, I researched Britney’s short 16-year-old story, deconstructed the lyrical themes of her debut album, and looked to discover the reason for her almost overnight success. Little did I know how successful and enduring she would be, but a young and relatively innocent Britney Spears was giving hints to the secret of pop idol longevity when she verbalized her determination to follow in the footsteps of her idol, Madonna, by constantly reinventing herself so that her popularity would never fade.

What’s all this musical history and trivia got to do with teens and their culture today? Fastforward to the Spring of 2005 and you’ll find the answer. That’s when I was a fly on the wall at a conference for marketers on how to successfully market to children ages two to 12. While there, I sat in on a seminar featuring a woman from Virgin Records who takes credit for creating and masterminding Britney’s meteoric rise to fame and fortune. Her seminar was titled “Grabbing Kids’ Attention in a Competitive Marketplace: Creating the Next Pop Icon.” Finally, I was going to learn the secret formula from someone who had actually enlisted and refined it!

After showing us a video of a young male artist Virgin hoped to launch later that Spring, the seminar presenter showed a clip that documented Britney Spears’ evolution as a pop star. She then went on to tell us what the record company did when they first met Britney back in 1998. The first step, she said, was to put her out in the public eye and portray her as the All-American girl. The reason? She’ll grab the attention of kids and gain the approval of mothers, those gate-keepers and pocket-book-holders who first need to embrace Spears as wholesome and healthy if there’s any hope of selling music, tickets and merchandise to their kids. The kids in her target audience, by the way, were as young as four and five years old.

But that’s not enough. Pop stars—to be enduring (we were told)—need to maintain “edge.” You see, the marketers understand that kids don’t always remain kids. They grow into teenagers and then into adults. Just as their bodies go through change, their tastes change as well. Consequently, if Britney Spears stays the same, she’ll wind up being nothing more than “so yesterday.” Because kids are in the process of breaking ties from mom and dad, they want their own music and their own stars. If mom approves, then it can’t be good. How did this work with Britney? Our seminar leader told us that Spears, by design, was initially a darling of mothers of young girls. It was all part of the master marketing plan to establish and sell the Britney Spears’ brand. But as those young girls grew up, they didn’t want to be listening to music that soothed mom’s ears and worries. So, Britney started the process of going over the edge, reinventing herself like Madonna, over and over again. In the words of our friend from Jive, Britney’s success—and the long-term success of any pop star—is that “she’s constantly pissed parents off!” That’s also why today, Britney and her three clones don’t look, sing, or act anything at all like each other or like they did back in that original photo!

So now you know the secret to pop star success. What’s all this got to do with youth culture today? That 16-year-old unknown singer the gal from Virgin Records introduced me to in the Spring of 2005 has gone on to become the latest pop darling among children and teens. His name is Chris Brown and his relatively innocent brand of music has gotten him all over MTV, the radio airwaves and teen magazines. He’s sold millions of albums and had numerous hit singles. The formula worked again. My hunch is that if you keep on watching Chris Brown, you will see it all pan out one more time. If the market allows it, tomorrow’s Chris Brown will be singing and living a new “map” to a vulnerable and easily swayed young audience.

There’s something about all this that should motivate us to think more deeply about doing youth ministry in a world that’s saturated with media, music and complex marketing schemes. In other words, it’s about more than quickly evaluating their music and labeling it as either “good” or “bad.” It’s about thinking “Christianly” and “biblically” about kids, their culture, the impact their culture has on them and interacting with the realities we discover in a manner that yields ministry efforts that will bring about real change in young people’s hearts. What does this mean for me if I’m ministering to students today?

First, don’t ever fall into the trap of believing that “youth culture” only shapes and influences teenagers. Long before they ever set foot into middle school, puberty or your youth group, they’ve been deliberately and systematically pummeled by a marketing machine that seeks to sell product, but is even more effective at selling a worldview. You can’t forget that perhaps the greatest power music has is to serve as a “map.” Consequently, Britney and Chris teach powerful lessons about what values, attitudes and behaviors are normal and right. Their lessons shape what kids think about vocation, sexuality, God, material things, authority, family, etc. As a cross-cultural missionary, you need to know the cultural landscape the kids in your community navigate every day. Remember, the younger the kids who live in the landscape, the more powerful that landscape is as a life-shaper. You need to not only know it, but know it better than they know it themselves. Because they’re marinating in it from the time they’re born, it will already have become a part of who they are before you even welcome them into your ministry. By knowing their culture, you’ll know them. You’ll also know what values and beliefs you should affirm, and what values and beliefs to challenge from the perspective of a biblical world and life view. Your high school students might not be listening to or embracing Chris Brown (or any other artist popular among children and pre-teens), but you can bank on the fact that right now, your future high school students are.

Second, you can support and assist parents by helping them understand the power and particulars of the emerging youth culture. Remember, you are not called to be the primary provider of spiritual nurture to children and teens, unless of course, you are raising them yourself. But you do play a valuable role as one who assists parents, supporting them as they struggle to point their children and teens to a life transformed by and lived in the presence of God. Parents find it especially helpful when you inform them of trends and realities that, quite frankly, most of them are oblivious to. In this case, go out of your way to share the secret to creating a pop star, and the specifics of the lifestyle and worldview that star’s mapping out for kids. By understanding this information, parents not only will be given something to communicate to their kids, but they’ll be less prone to being manipulated themselves.

Finally, what I learned at the marketing conference makes a great case-study to communicate to your youth ministry kids. One of the greatest downfalls of the church and youth ministry over the years has been our unwillingness and inability to teach young people how to be wise and discerning in their interactions with media and marketing culture. By letting the cat out of the bag of the formula for pop music success, we can teach them that they are being manipulated and exploited by a marketing machine that ultimately wants nothing but their money. In addition, we can instill in them a healthy skepticism that is prone to ask hard questions of marketing and media, rather than so willingly swallowing all of marketing and media’s answers to life’s big questions. Together, keep a critical eye on Chris Brown and other young pop stars as they evolve and change. Sure, your kids might not buy into everything you’re teaching them now, but you must remember that they are in process. Your investment in teaching them how to be wise and discerning now will pay great dividends for years and generations to come.