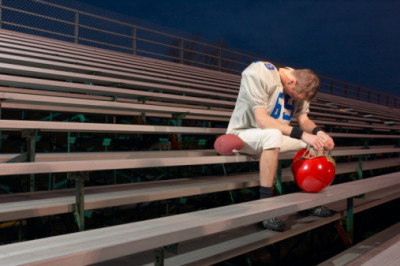 – by Chris Wagner
©2004, The Center for Parent/Youth Understanding

Last month, the world’s greatest athletes gathered in Greece to display their God-given talents, gifts and abilities. As the world watched, each athlete and team felt immense pressure to perform their best, positively represent their respective countries and bring home a coveted Olympic medal.

Olympic athletes are not alone in dealing with extreme amounts of athletic pressure. Our very own teens—some who have personally decided to pursue their interests in athletics, and others who are forced by parents—are increasingly facing more and more pressures.

Nearly 36 million children ages six to 17 in the United States participate in team sports. That’s 74 percent of our youth. Though there are many reasons young people play sports, the primary reason, according to research from the Institute for the Study of Youth Sports, is to have fun. However, somewhere along the line the fun disappears and fewer kids remain interested in athletics. A Michigan State Youth Sports Institute survey revealed that 70 percent of young athletes will drop out of sports before turning 13. This high dropout rate is due to some losing interest and others pursuing different hobbies. But all too often these kids no longer have fun and drop out because of the pressure put on them to succeed.

What’s the primary source of this pressure? Kids say it’s their parents. The survey cited above lists “adults, particularly parents,” as the main cause for kids dropping out of athletics and the #1 reason for game playing becoming a “joyless, negative experience.”

Some parents take their children’s sports way too seriously. More and more accounts of parental sports rage can be found in newspaper headlines. At Little League games, youth soccer games, hockey competitions and more you can find parents getting into disputes with other parents, coaches, umpires and even players. League officials of the Northern Ohio Girls Soccer League have attributed “the disorderly behavior of parents and coaches to an over fixation with winning and losing.” As a result, young players are distracted from learning, developing fundamental skills and having fun. Instead, kids are learning that winning is everything and confrontation is the best way to achieve this success. Of course kids want to win because winning is simply more fun than losing. But problems occur when parents and coaches emphasize winning at all costs. Parents need to instill and encourage a healthy view of winning to young athletes.

Young athletes feel pressures from their parents other than the pressure to win. Many parents see success in athletics as a way to further the family name up the ladder of their community’s social hierarchy. This will often cause brothers and sisters of successful older siblings to feel pressure to live up to their older siblings’ accomplishments, not only in eyes of their family, but in their schools and communities as well. A young child with low self-esteem and parents who have an unhealthy “fixation on winning and losing” may become suffocated by the weight of carrying out these expectations.

Parents of young athletes who are successful in the early years too often get the notion that their child can and will become a professional athlete. The pursuit of pro sports is a very noble quest. However, this decision should not be pressed onto a 10-year-old from his parents before even entering into the stage of puberty in which his size, weight, proportion and cognitive ability will drastically change.

While some parents realize pro sports are a lofty goal, the prize of an athletic scholarship seems much closer to reach. Andrew Stephen, in his report “How Lacrosse Became a Blood Sport,” writes, “with top college places becoming less available to middle-class kids … sports scholarships have become the get-ahead weapon of the well-off rather than the traditional route for the impoverished.” A Sports Illustrated article focusing on the American athlete at age 10, said parents of kids as young as seven ask coaches if their child is “wasting their time in their sport.” They would like to know if their child has a chance for a scholarship, even though it will still be another 10 years until these kids even apply for college!

Another pressure athletes may face from their parents is to remain active in their sport, even after interest has been lost, because of the time, effort and money their parents have invested in their ability. Cumming and Ewing suggest that this occurs especially in cases where early specialization in a sport has occurred. They say, “athletes feel guilty about the consequences of their involvement in sport (e.g., marital disharmony, disruption to family life, loss of free time, cost of training and competition) and feel pressured to continue participating.” It’s important that young athletes learn necessary lessons about hard work, sacrifice and dedication, but parents need to be sure their children and teens are not getting “burned out” from over-participation and the pressure to continue. An open line of communication is also important. Parents should sit down and discuss athletic options with their children and teens and allow them to have some freedom to make their own decisions.

A coach recently told me about parents who would constantly yell out directions during youth basketball games. While he tried to set-up a play they went over in practice, parents’ commands would contradict and interfere with his calls as a coach. Think of the adolescent in this situation who wants to have fun and learn about the game of basketball. Now he’s forced to choose between his coach and his parents, both of whom want him to succeed. This added pressure coming from parents, in an already pressure-filled game, is not needed for a child who simply wants to enjoy the playful and competitive nature of the sport.

Parents are not the only source of pressure facing today’s young athletes. Consider these added pressure points for teen competitors:

In their quest to be the best at their sports, many teens are faced with the option of using sports supplements such as creatine, steroids, ephedra and androstenedione. Guys who are excellent athletes may use supplements to gain an edge on their competition, while lesser athletes may use them to “catch up” with the rest of the field. Girls who feel social pressures to have an “ideal body” and excel in their sports may also be tempted to use supplements. In sports such as gymnastics and swimming in which endurance and appearance are important, girls may have added concern about their weight. Kidshealth.org states that “teens and kids may seem like an easy sell on supplements because they may feel dissatisfied or uncomfortable with their still-developing bodies, and many supplement companies try to convince teens that supplements are an easy solution.” Supplement use is so pervasive among high school senior athletes that a study of creatine (a popular dietary supplement used to increase speed and strength) use showed that 44 percent had taken it. Some also go on to try illegal substances such as anabolic steroids.

Other athletes feel the pressure to succeed because of their families’ income level. Athletes from low-income families often feel personally responsible for helping their family out of impoverished situations. This puts the weight of the world on their shoulders as they feel they have to excel in sports in order to go pro. In their eyes, achieving anything less would be letting down and disappointing their family.

The high school minefield of popularity games can also lead to distractions for athletes. Often the best athletes are automatically accepted by the “in” crowd. Unfortunately the demands that regularly fall onto those in the “popular” crowd include activities such as heavy partying, drinking and sexual activity.

It is important for student athletes to maintain their grades and do well in their classes. Students who fail to do so become ineligible and are placed on probation from athletics until their grades improve. The pressure to find time to study and do homework often becomes overwhelming and overlooked as students are forced to practice for hours each day after school.

Lastly, athletes feel pressure from their local communities and school districts. This is especially prevalent in “football towns” and other areas that take great pride in their high school’s athletic accomplishments. Already dealing with the pressure to win placed on them from their coaches, students in these towns are faced with the expectations of their communities that say a single loss within a season is unacceptable.

Helping them handle the pressure

As you begin to understand the many pressures facing your child or teen, here are some important reminders to help make your child’s athletic experience the best it can be, and to help you be a better parent on and off the field: