During my college years I had a summer job that was very eye-opening. I worked as a Mental Health Technician in a private psychiatric hospital that was in the middle of shifting from an old school sanitarium for chronic cases (think One Flew Over the Cuckoo’s Nest) to a more modern facility that was focused on treatment and cure.

Having grown up near the hospital’s property I had heard, believed, and spread many of the myths and legends about what went on deep into the grounds of the old stone estate that lay at the end of the long, long tree-lined driveway. To put it bluntly, the place was scary. I learned much about the old ways of treating mental illness, along with the emerging new treatments that were rapidly unfolding.

It was the mid-70s. And lost in the transition of what was really going on at least several times a week on the 20-bed adolescent ward that I helped manage during the afternoons and evenings, was a frightening regular occurrence. A not-so-unusual and all-too-frequent behavior we encountered was self-inflected cuts – usually on the arms and wrists – among our population of young patients. Because we were in supervisory roles, we worked with the nurses and doctors as part of the mental health team to record behaviors and enact treatment plans. I distinctly remember – most likely because it was happening regularly – that we were instructed to first seek medical attention for the bleeder, and then to make a chart entry indicating a “suicidal gesture” or “attempted suicide.” Based on what we know now, we were totally missing it.

Some 20 years later – back in the early 90’s – I received a letter from a local woman whose two teenaged children were attending a local Christian high school here in Lancaster County. The woman described some strange behavior her two kids were encountering among a growing number of their friends at the Christian school. They were cutting themselves. I embarked on a mission to get more information, knowing that there had been some significant developments in our understanding of this behavior. I went to the medical library at the local Penn State University teaching hospital in Hershey, and began my search. I found very little in the journals. In fact, the other day I pulled out the file and saw just how little there was. . . . not just in volume, but in understanding. Researchers at that time knew this much: it was happening more, it was happening mostly among young teenage girls, it was largely hidden and not discussed, those who did it were finding emotional relief, there seemed to be a common-thread of sexual abuse victimization in the past history of cutters, and there was a desperate need to do more research in order to gain understanding.

Fortunately, we have been learning more. Unfortunately, more and more kids are cutting and they are doing so with greater frequency and intensity. If you know anything at all about youth culture, you know that cutting is far more common and widespread in today’s world. Just this last week I spoke with another group of Christian college administrators and faculty who say that on their campus – like all other Christian college campuses – cutting and disordered eating continue to populate female dorms at epidemic levels. 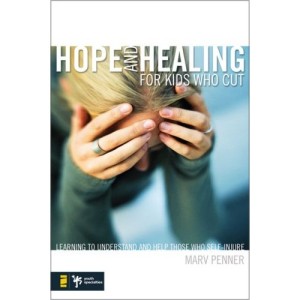 This is one of those trends that we cannot ignore. My good friend Marv Penner has been counseling and working with cutters for years. He continues to research the problem and his understanding runs deep. I’m on a mission to get the word out to every youth worker, pastor, and parent about Marv’s new book, Hope and Healing for Kids Who Cut: Learning to Understand and Help Those Who Self-Injure. Each of us plays a vital role in identifying, helping, and referring cutters so that they might find the healing that comes not through the shedding of their own blood, but through the bloody wounds of the one who heals all wounds.

Several years ago I was speaking to a group of youth workers from a large national youth organization. I consider them to be some of the best at reaching kids. After I spoke, I had some great conversations with stragglers. I had difficulty listening to what one straggler was asking me. His arms interrupted my ability to listen. From his wrists all the way up to where his arms disappeared underneath his sleeves, every bit of his skin was covered by horizontal scars. It looked like scars on scars. He didn’t cower from my question nor did he think it rude when I asked, “Would you tell me about your arms?” I learned a lot more about cutting that day. I learned a lot about that young youth workers life and his past struggles. I learned about the redemption he had experienced. I saw why he was so effective in his ministry with kids who cut. This is stuff we all need to learn.