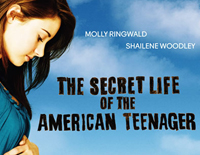 Last night I watched the premiere of the new ABC Family Channel series, The Secret Life of The American Teenager. I hadn’t seen any of the previews so I really had no idea what to expect from this new show from the producers of Seventh Heaven. Even though the first hour left me feeling like the show is a bit hokey, over-acted, and somewhat lame, I do believe there’s some potential. . . most of which lies not in the show’s plotline, but in the possibilities the plotline present for discussion with a certain – yet to be determined – group of kids.

First, the story. . . . which is at this point fairly simple even though it’s headed quickly into the realm of teen-targeted soap opera. All the campus stereotypes are present, and during the first hour they had some interesting interactions designed to lay the groundwork for further plot development. Fifteen-year-old freshman good girl Amy Juergens plays French horn in the band. She suspects and discovers she’s pregnant, the result of her first-time (and nothing good about it) sexual experience at band camp. The father, Ricky Underwood, is the band’s drummer. Sexually abused by his father as a child, Ricky now lives in a foster home, regularly attends therapy, and is obsessed with having sex with every girl he meets. . . . including Amy. In this first episode, Amy reveals her pregnancy only to her two best friends, who offer advice, but she has yet to tell her mom and dad. Incidentally, Amy’s 13-year-old sister Ashley is an emerging Goth whose search for identity is leaving her family dazed and confused.

Other characters offer stereotypical portrayals of how teenagers handle their emerging sexuality. Grace Bowman is the 15-year-old bubbly evangelical Christian who speaks in Christian clichés – oftentimes while a church organ plays in the background (I said it’s hokey), and is outspoken about her promise ring pledge. In teen language, Grace is “hot,” which may be why she’s so good at getting her unsaved peers to attend her youth group’s post-football game dance and party. . . . where, by the way, Grace teeters on doing some dirty dancing of her own with boyfriend Jack. Even though he’s a football player, Jack is Grace’s follower when it comes to faith. It quickly becomes obvious that all of Jack’s faith-talk (clichés and organs again) is more of an effort to convince himself to remain sexually pure, than to give in to his – for lack of better words – curiosity and horniness. After unsuccessfully trying to get Grace to engage in oral sex (“Is oral sex sex?”), viewers discover that Jack satisfies his sexual curiosity with steamy and seductive baton twirler Adrian (I told you it was going to be a soap opera!). Incidentally, it’s Grace’s downs-syndrome brother Tom (a member of Grace’s over-the-top and sticky-sweet evangelical family) who discovers Jack and Adrian locked in a kiss at the end of the first episode, leaving everyone hanging until next week.

One other character worth mentioning is Ben, another virgin freshman who wants a sex life and talks about his desire with unbelievable openness with the new school counselor. By episode’s end, Ben’s pursuit of Amy leads him to join the school band (cymbal player!) and the episode closes with Amy and Ben slow-dancing in the church gym. At some point in an upcoming episode, Ben is in for a big surprise.

That’s the story. Now some thoughts.

First, the show is simple, over-acted, and as I said before, a bit hokey. I felt like I was watching High School Musical without the music, but with a simplified peek into coming-of-age sexuality in today’s youth culture. That said, the target audience for this show is pretty clear. Late elementary-aged girls, middle-school girls, and high school girls who are less jaded (naïve) will most likely get sucked into this soap opera. I can’t imagine the typical high school kid connecting with The Secret Life of the American Teenager, but I could be wrong.

Second, I think the show will raise enough real-life issues (sexuality, sexual abuse, oral sex, etc.) that it’s value will lie in parents and their kids watching together, followed by some healthy discussion. If that doesn’t happen, the show could function as a pretty powerful mentor and map for kids looking for sexual and relational guidance.

Finally, I’m guessing the portrayal of Grace and her family will have lots of Christian’s buzzing with anger this morning. I can understand that. . . . I hope that I never come across that way to the watching world. (I can assure you that my life looks nothing like the smiley/bubbly/sugar-coated lives of the Bowman family). But the reality is that the portrayal flows from a watching world that has all-too-often seen Christians live shallow, cliché-filled, unrealistic, and dis-integrated lives. What the show reflects back to us shouldn’t make us angry at the writers and producers, but should make us angry with ourselves. I don’t think the stereotype would exist if we didn’t fuel it. . . . . which just might be the best discussion point coming out of the first episode of The Secret Life of The American Teenager.

So do we watch next Tuesday at 8pm? Or do we find a good book and lay in the hammock? It all depends on who else will be watching. If it catches on with the kids – and I think it’s destined to do just that – then we should be watching too. Then, we need to do some talking as this is one show that will help open doors for discussion on a variety of real-life issues, each of which the Scriptures speak to in liberating and life-giving ways.