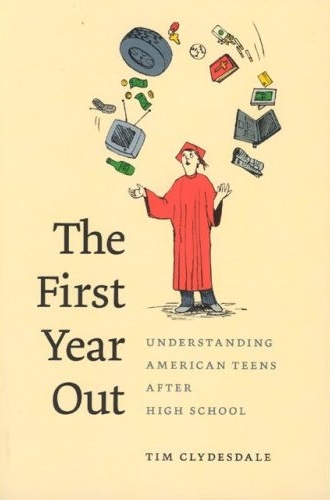 Lot’s of new announcements coming from us here at CPYU in the next few weeks. Fasten your seat belt! One of the projects Derek Melleby has been working on is a new blog called “CPYU Bookshelf.” It will debut in a few weeks as a new resource that’s sure to be a hit. In the meantime, Derek has been working on some material prior to the launch, including an interview with Tim Clydesdale, author of The First Year Out: Understanding American Teens After High School.

Derek asked Tim some great questions. Tim’s answers offer some helpful insight into who teens are and how we’re doing ministry. You’ll have to wait to read the entire interview. But I thought I’d pass on Derek’s last question to Tim, along with Tim’s answer. . . . which includes some challenging and sobering observations at the end.

Derek: “College transition” is currently a hot topic in youth ministry these days. Churches are reporting that more and more students walk away from the faith during the college years. What do you think are the implications of your research for youth pastors as they prepare students in their youth groups for college?

Tim: Those who “walked away” from their faith during college made the decision to do so long before their college years – they just waited for the freedom of college to enact that choice. In many cases, these teens reported having important questions regarding faith during early adolescence (12-14 years old) that were ignored by their parents or pastors rather than taken seriously and engaged thoughtfully. It is in early adolescence that faith trajectories (along with other life trajectories) are set, thus early adolescence is the point when preparation must occur. Middle and late adolescence are increasingly similar, as college represents less of a qualitative change and more of a quantitative change. In other words, there are few ideas and freedoms available to college students that are not also available to high school students – college students simply experience ideas and freedoms in greater quantity. Hence, early adolescence are the years when churches must prepare their youth, and must do so fully aware that youth now arbitrate among many claims for their allegiance. Sadly, most youth ministries are long on fun and fluff and short on listening and thoughtful engagement. The former produces a million paper boats; the latter produces a handful of seaworthy ships. Launching a million paper boats is an amazing spectacle on a clear summer day, but only a ship can weather storms and cross oceans.

Did you read those last three lines???? Read them again and ponder them. Wow. What do you think?