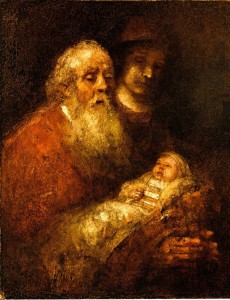 It’s usually the content of humorous reflections on previously unfinished business that when finally done, leads us to act like our lives are complete. . . even though we know deep down inside that isn’t even close to the truth. Since this illustration is fresh on my mind, I’ll use it: The Phillies win the World Series. Frustrated fans who have waited a long, long time look at each other as they jump up and down in jubilation, screaming, “Now I can die!” Not really.

This morning I was reminded of the amazing “Now I can die!” uttered by that righteous and devout old man of Jerusalem named Simeon. He was waiting for “the consolation of Israel,” that sweet comfort of seeing and knowing the Messiah.

Mary and Joseph bring the infant Jesus into the temple to be circumcised. Simeon takes the baby that came as part of this ridiculously unbelievable – yet amazingly true (yes Bill Maher, it’s ridiculous and true!) – unfolding drama of redemption that could only be conceived by the Creator of the universe who so-loved His fallen creation that He would come to undo what had been done. As he’s holding Him in his arms Simeon says these words: “Sovereign Lord, as you have promised, you now dismiss your servant in peace. For my eyes have seen your salvation, which you have prepared in the sight of all people, a light for revelation to the Gentiles and for glory to your people Israel.”

Amazing. What’s flawed has been fixed. Messed up beyond self-repair, now we can be made over. Don’t you love Christmas? Now I can die!