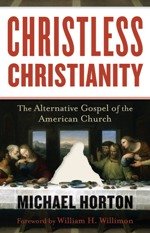 I’m just finishing another one of those books that prophetically rocks my happy and satisfied little world. . . . making me restless and uneasy. It’s Michael Horton’s latest. . . Christless Christianity: The Alternative Gospel of the American Church. The book offers a compelling critique by a humble man and solid theologian who deeply loves Christ and His church. This isn’t some knee-jerk rant by a disatisfied customer. Rather, it’s a well-reasoned and well-researched critique of what is, what shouldn’t be, and what should be.

This is one of those books that if you read it, it just might spark deep change in who you are, how you view Christ and Gospel. . . . along with how you parent and do ministry. Guys like Horton are like my doctor. They want me to come in from time to time when I don’t think there’s anything wrong. They poke and probe all over the place to get a good read on where I am. . . and then they issue some needed warnings, precriptions for change. etc. They tell me about things I haven’t seen in the everyday rush of life with a body I’m all-too-familiar with because it’s been with me 24/7 since the moment I was conceived! That’s what I like so much about Christless Christianity. It’s an eye-opening check-up.

Here are some interesting quotes that I’ve encountered during my read. . .

“Where everything is measured by our happiness rather than by God’s holiness, the sense of our being sinners become secondary, if not offensive.”

“While the blood of martyrs is the seed of the church, the assimilation of the church to the world silences the witness.”

“There is a tendency to make God a supporting character in our own life movie rather than to be rewritten as new characters in God’s drama of redemption.”

“Far from clashing with the culture of consumerism, American religion appears to be not only at peace with our narcissism but gives it a spiritual legitimacy.”

“Like any recreational drug, Christianity Lite can make people feel better for the moment, but it does not reconcile sinners to God.”

“It is not secular humanists but we ourselves who are secularizing the faith by transforming its odd message into something less jarring to the American psyche. This may mean, however, that precisely the most numerically successful versions of religion will be the least tethered to the biblical drama of redemption centering on Christ.”

“‘Smooth talk and flattery’ is part of the staple diet of successful American religion today. And it is almost always advertised simply as more effective mission and relevance.”

“I have no reason to doubt the sincere motivation to reach non-Christians with a relevant message. My concern, however, is that the way this message comes out actually trivializes the faith at its best and contradicts it at its worst.”

Some of you, I’m sure, have wondered why CPYU has chosen Christless Christianity as our resource of the month. If you know us, if you know our passion, and if you read the book, it will become obvious why it’s on our list of must-reads.