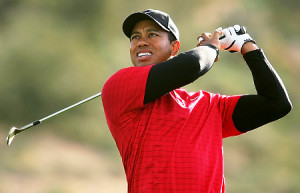 A few weeks have passed since the Tiger Woods we all knew was eclipsed in our collective consciousness by the Tiger Woods who is. I’m not a golf fan. I don’t watch it on TV. I find it boring. I don’t play it. . . except once in a blue moon. And then, I’m not really playing as much as I am trying. To be honest, the price of golf balls and the fact that I go through about a dozen-and-a-half per round makes the game unaffordable. All that to say, my knowledge of Tiger Woods is that he’s a good golfer and a cultural icon.

Still, I’ve spent portions of the last three weeks trying to figure out what the Tiger Woods story tells us about ourselves. I don’t claim to have any kind of solid grip on this thing, but there are some thoughts that have been rattling around inside this head of mine since the media reports broke about Tiger’s wife using a golf club for something other than the game it was intended for.

To me this story has been like a double-edged sword. Both sides are equally sharp and dangerous. On the one side is the edge that’s all about our ridiculous obsession with celebrity. . . a celebrity obsession that manifests itself in both our following and our becoming. We adore the rich and famous, setting them up for worship much like the biblical sacred cow. Yes, we were created to worship. The only problem is that we consistently get the object of our worship wrong. . . over and over and over again. In this case, it was a man we thought to be perfect. In addition, our media-saturated world of reality TV and YouTube have made it all the more possible for us to indulge and pursue our ridiculous celebrity fantasies where we take center stage while the whole world watches and worships us as we worship ourselves.

The other side of the double-edged sword is all about denial. What we deny is the fact that we really are rotten to the core. In my faith tradition we call it “depravity.” We’re broken. Messed up. Fallen. And, we can’t get up. . . at least not on our own. At first, the world saw Tiger as a good guy. Now, the world sees Tiger as a good guy who messed up. The reality is that Tiger’s a messed-up guy – just like the rest of us – who did a good job at indulging and then covering up his messed-upness. Until now.

With Christmas just a few days away it might be good to reflect theologically on Tiger Woods and what the story tells us about ourselves. . . and Christmas. You see, what we celebrate (which has by and large been forgotten in today’s consumer culture) is the coming of the God-Man Jesus Christ into the world to do what we cannot do for ourselves for the simple reason that we’re so rotten to the core that we need God to initiate the picking-up. And pragmatically speaking, when I realize God has done that, why in the world would I want to worship anything or anyone else? As Timothy Keller says in his wonderful new book Counterfeit Gods: The Empty Promises of Money, Sex, and Power, and the Only Hope That Matters, it is through a living encounter with the one true God that we can have hope and life.

So, maybe we shouldn’t be surprised by what’s come out about Tiger Woods. Shouldn’t we have known all along that he has feet of clay? And shouldn’t we know that our feet are made of the same stuff? And shouldn’t we avoid the temptation to excuse his and our own immoral behavior with something like, “After all, he’s (I’m) only human?”

Following Tiger Woods over the last few weeks forced me to think about some words of warning Gordon MacDonald wrote after the truth about Ted Haggard was told a few years ago (MacDonald, by the way, had the truth told about him several years before): “I have come to believe that there is a deeper person in many of us who is not unlike an assassin. This deeper person can be the the source of attitudes and behaviors we normally stand against in our conscious being. But it seeks to destroy us and masses energies that – unrestrained – tempt us to do the very things we ‘believe against.’ If you have been burned as deeply as I (and my loved ones) have, you never live a day without remembering that there is something within that, left unguarded, will go on the rampage. Wallace Hamilton once wrote, ‘Within each of us there is a herd of wild horses all wanting to run loose.'”

The Apostle Paul said it this way in Romans 7 – “I know that nothing good lives in me. . . I want to do what is right, but I can’t. . . Oh what a miserable person I am! Who will free me from this life that is dominated by sin and death? Thank God! The answer is Jesus Christ our Lord.”

We desperately need perspective on Tiger, on life, on ourselves, and on Christmas. What a joy to know that the Savior has come!