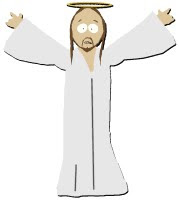 Admittedly, I know very little about what’s really happening with Jesus at Comedy Central. The little I do know is what’s been coming out bit by bit through various news outlets since late last week. Word is that Comedy Central let its advertisers know that they’ve got 23 potential series in the works for their fall lineup. A new animated series, JC, is in the mix. This one, from the producers of The Office, depicts Jesus as a “regular guy” who wants to learn how to adjust to living his life in New York City. His greatest hindrance is the shadow of his “powerful yet apathetic father” who spends his time indulging his video game addiction. Jesus is no stranger to Comedy Central as he’s had a recurring role in South Park.

Making sense of this move on the part of the network – a network that holds little if nothing at all as sacred – has been somewhat confusing. You don’t want to overreact or underreact. Nor should one allow their emotions to eclipse a response that’s grounded in the truth. Doing “something” is not justification for doing “anything.” Not coincidentally, I’m sure, is the fact that I’m currently reading James Davison Hunter’s new book, To Change The World, a very direct critique of how Christians have failed to transform culture, particularly in instances like the one that’s most likely about to play out in the church in response to JC.

I’m not about to propose a strategic response. But I do have some thoughts occasioned by Comedy Central’s announcement.

First, some Christians are going to be mad. . . . very mad at Comedy Central. That anger will be fueled by the fact that Comedy Central censored South Park in light of threats of violence from Muslims upset over that series’ depiction of Muhammad. But I wonder if we should ultimately be more sad than mad? Should we be angry that the people at Comedy Central are doing this? Or should we be sad over the condition of the hearts from which their actions come?

Second, if the show does make it into the fall lineup, I’m sure it will develop a huge following, particularly among teenaged and young adult males. This is just the kind of irreverent cartoon humor that’s been lining them up for years. They’ve been groomed by South Park and Family Guy. Sadly, this army of followers will include those who proclaim allegiance to the very God who the show grossly misrepresents and blasphemes. It will be another in a long line of examples of how integration of faith into all of life is waning.

Third, God’s big enough to take care of Himself. The day after the premiere episode of JC airs, the God who remains the same yesterday, today, and forever will not have changed.

Fourth, that unchanging God is the God we need to proclaim to our kids. I sometimes wonder if our anger might not be sparked by the fact that too many of our Christian kids fall for this kind of stuff. . . . which might actually be an indicator of the fact that we haven’t prepared them to filter this kind of stuff with any sense of discernment long before shows like JC are even conceptualized. Without knowing the truth, one has no ability to discern lies.

Finally, I wonder how much we’re like the folks at Reveille, the production company that’s got JC in the works? They’re reinventing God in their image. The Father and Son in JC will bear little resemblence to the Father who revealed Himself to His creation in the written and incarnate Word. Don’t we (the church) have a pretty successful track record of doing and still doing the same? I’m wondering if that’s the thing that should concern us the most.