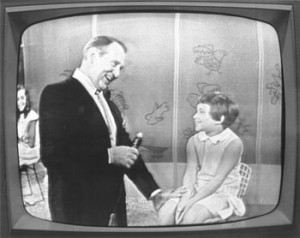 Even though I’m 53 years old and long removed from my childhood, it still hurts a little when one of the beloved icons of your childhood dies, maybe because you used to think that these guys would live forever. That’s happened to me twice this week. First on Sunday, with the death of Wee Willie Webber, a local Philly TV personality. Yesterday, it was Art Linkletter. Both of these guys made after school memories for kids my age. Webber did it with the cartoon shows he hosted. Linkletter did it with his nationally televised daily shows, House Party and People Are Funny.

Art Linkletter was one of my favorites. When he died yesterday at the age of 97, I couldn’t help but chuckle as I remembered the way he made me laugh, even when I was a little kid. Linkletter had quite a life. 97 years is a long time to live. His deep faith in God sustained him during years that were filled with both great joy and great heartache. His heartache started at a young age, when he was born in Moose Jaw, Saskatchewan (believe it or not I’ve spent a lot of time in that little prairie town over the years), and then quickly abandoned by his family. By God’s grace, he was adopted by a pastor and raised in a Christian home. He was married for over 74 years, an accomplishment that many view as astounding in today’s world, but more than likely something Linkletter believed to be the way things should be. A father of five, perhaps the greatest tragedies in his life came through the deaths of three of his children. A son was killed in a car accident. Another son succumbed to lymphoma. The most hard-hitting of all was the death of his 20-year-old daughter to suicide in 1969.

I loved two things about Art Linkletter. First, there was his voice. It was gentle and smooth. To this day, I think of him as the kind of guy that you’d love to sit at your bedside to read you stories as you fall asleep. Second, was his love for kids. He was an effective communicator with kids because he had the great ability to move to their level, ask good questions, and then listen intently. He did that each and every day on House Party in a segment called “Kids Say the Darndest Things.” He not only modeled great communication skills in those interviews, but he could really make us laugh. He’d masterfully use a progression from great question, to a kid’s answer, to his follow-up interaction with viewers through the camera and a simple look of wonder and surprise. . . and it was brilliant.