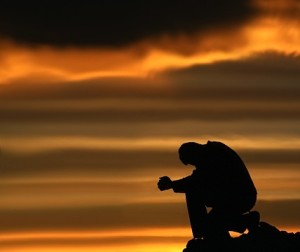 “When is it going to end?” I asked Lisa that question last night as we went through the routine of getting me hunkered down for the night in the hospital bed that now sits in my family room. I know the answer to the question. God will bring it all to an end as he brings his purposes to pass. . . some day. Still, I asked out of the frustration of another day of being exposed to the suffering, hurt, and heartache that exists in our world.

One of the blessings of my own personal condition right now is that God is doing something in my life. Part of that something is a new exposure to the world of pain, hurt, and suffering that’s always been there. . . but that my own creature-comforts and self-absorption with the everyday affairs of my life have kept me from seeing and understanding. I can’t, however, say that I’m liking this. Even my simple trip to the hospital for my first post-trauma follow-up appointment yesterday left me shaking my head. The waiting room was filled with folks who were going to heal from breaks and tears like my own. It was also populated by folks who have very clearly been ravaged by disease. . . some of them hanging on by what appeared to be a thread. There was our quick conversation with a couple who like us, was trying to find their way through the maze of hallways to a particular suite. In the short few moments we talked I learned that the man had just spent 6 weeks in the hospital and that he was one day away from having his lung removed. Then, late last night we learned of a difficult diagnosis that has left some friends asking questions and wondering about the future. Tomorrow, a 60-year-old fellow church member who loved Jesus and loved kids will be buried after a lengthy and difficult battle with ovarian cancer. I’ve been burdened for another friend who is struggling with some family breakdown and is wondering what in the world happened. The list goes on and on.

What am I to do with all of this? The reality is that beyond supportive involvement, there is little or nothing I can do that will bring any lasting change with the exception of prayer. In his first letter to the Thessalonians, the Apostle Paul gave them this simple instruction: “Never stop praying” (5:17). I’ve known this my whole life. I’m not sure I’ve ever understood it as deeply as I do now. And so when I woke up at 1:30am, I knew it was time for me to pray for these and others who have exhausted their own strength and resources to the point where they can only rely on the Lord. . . which right where he wants us.

After falling back asleep and waking up again this morning, I knew I had to give thanks for those who have been praying for me. To be honest, even I’m surprised at how much I’ve healed in three short weeks. Sure, there’s lots of healing left to be done, but I got to thinking about how meaningful it is that people are praying for me.

While still laying in bed, I grabbed my blackberry and scrolled through the emails the messages that came through the night. As it’s happened almost every night for the last 50, I had a message saying that Alisa Parrett had posted an update on Gary’s condition to their Caring Bridge site. Today, Alisa shared these words regarding her Dad’s day yesterday at the rehab hospital: My mother met with my dad’s new doctor today–he had actually been instrumental in working out my dad’s transfer from Korea, but this was the first time any of us had met him. My mom was so blessed by meeting him–we pray blessings upon him and upon the rest of the hospital staff. The doctor spoke to my mom today about the power of prayer. He said that in a field as unpredictable and unknown as brain injury, patients who have large bases of prayer support always seem to recover better than expected. We know that my dad has a large prayer base, and we are so grateful for that! God answers prayers.

I selfishly covet your prayers. I want to get better. But don’t forget that there’s a host of people right under your nose who need your prayers much, much more than I do.