On October 8th, nine 17 to 19-year-old Central Washington University Students attending the same party had to be hospitalized with blood-alcohol levels of 0.12 percent to 0.35 percent. When the story first broke, officials were puzzled, wondering if the students had willingly or unwillingly consumed drugs, perhaps even date rape drugs. But toxicology tests for drugs were negative. Just two weeks later, officials released their findings. The common thread for the nine – one of whom almost died – was that they had consumed a sweet, highly-caffeinated, alcoholic energy drink called Four Loko. Sadly, this incident is not isolated, but increasingly common.

It’s no secret that the alcohol and tobacco industries need to cultivate new drinkers and smokers to stay alive, generate revenue, and grow. While there have been many times when they’ve denied it, those charged with creating marketing campaigns know that today’s underage drinkers and smokers are both the now and future tobacco and alcohol market. And while there are numerous regulations in place to prohibit them from creating and marketing products to teens, there are ways around that.

In recent years, the alcohol industry has created and peddled lots of new colorful and fruity products that blur the packaging and content line between kid-stuff like juices and soft-drinks, and adult stuff like highly caffeinated energy drinks, wine coolers, and even beer. 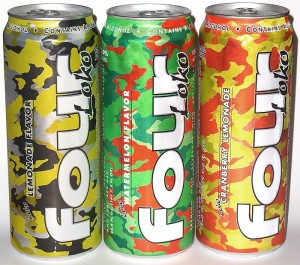 Now, the canned beverage known as Four Loko – from Chicago-based Phusion Projects Inc. – is flooding youth culture from young adults down to curious and young thrill-seeking kids. The brightly-packaged 23.5 ounce cans contain a caffeinated, 12% alcohol malt beverage that generates a dangerous buzz that is potent and fast-acting. The alcohol content is three times that of a beer. One can of Four Loko is equivalent to a six-pack of beer in alcohol content. Both users and health-care officials have likened Four Loko to cocaine in a can. Like soda, Four Loko contains sugar, artificial flavors (Grape, Blue Raspberry, Orange, Watermelon, Fruit Punch, Lemonade, Cranberry, and Cranberry Lemonade) and carbonation. It also includes taurine, guarana, caffeine, and wormwood (the active ingredient in absinthe), the four ingredients developers used as a basis for the drink’s name.

Four Loko’s rapid rise in popularity has administrators and healthcare officials on college campuses working hard to raise awareness among students as to the very real dangers associate with the drink. The fact that a growing number of cases of alcohol-poisoning related to Four Loko consumption and binging are being reported in hospital emergency rooms has officials concerned as well. This trend is sure to continue as Four Loko drinkers endeavor to down three or fan cans in quick succession in an effort to get the full effect of a quicker high.

Why is Four Loko gaining popularity among young adults and teens? There are many reasons.

First, kids are by nature risk-takers who have a sense of invulnerability that feeds the sense that “nothing bad will ever happen to me.” Not only that, but kids are looking to have a good time, and Four Loko is associated with fun.

Second, Four Loko offers a cheap high. At around $2.50 a can, it’s affordable. As a result more and more kids are going to drink it.

Third, Four Loko is marketed and sold in ways that attract the attention of younger and underage drinkers. For example the cans give off a “fun feel” through the use of bright colors that catch the eye. In some stores, Four Loko isn’t found on the shelves near beer and other alcoholic beverages. Instead, Four Loko is shelf-stocked near the non-alcoholic energy drinks popular among kids. In addition, the drink’s fruity flavors are attractive to young consumers who have been raised on fruit juice.

Fourth, the drink is marketed as being both fun and sexy. A visit to the Four Loko homepage features shadowy silhouettes of a couple of young, naked women standing seductively in the shadows, a marketing ploy that not only draws in the male audience, but promises alcohol-infused sex-appeal to female drinkers. In fact, many of the many Four Loko songs that are popping up on YouTube tout the drink’s ability to make those who are ugly, sexually attractive in the eyes of Four Loko drinkers.

Fifth, there’s the viral element that’s been fueled by the world of social media. Four Loko’s growing Facebook Fan Page features testimonials and drinking suggestions from satisfied Four Loko drinkers. The page includes this poetic descriptor of the drink’s effects: “Corny?!…Four loko: big sizes which make you do surprizes…Tastey and makes you wastey…If you dont like it, you’re a sucker cause four loko makes you f____ her…
It has a deliscious flavor but the memories you cant savor…”

Sixth, there’s the pop culture element, particularly the growing number of Rap videos – many of them claiming to be “official” – that are posted on YouTube. A quick YouTube search of the term “Four Loko” provides perhaps the best street-level education on the drink that’s available.

Finally, there’s word-of-mouth. Kids are drinking it, then telling their friends. Once that happens, word is out and the power of peer pressure kicks in full-tilt.

What can we do in response? Here are a few quick suggestions. As with any alcohol-consumption issue that involves underage drinking, binge drinking, or the immoral aspect and irresponsibility of drunkenness and the many resulting spiritual, physical, and emotional risks, the rising popularity and abuse of Four Loko requires diligence on the part of all adults. Parents should warn their kids about the potency and dangers of Four Loko. They should also set and enforce strict behavioral parameters when it comes to substance abuse. Parents and youth workers should present a united front by providing a Biblical perspective on drinking. In addition, they should discover and address any underlying issues that are driving kids to self-medicate through substance abuse. And finally, community members should unite to establish policies that regulate the marketing, distribution, and sale of Four Loko to kids.