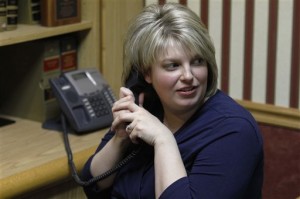 Natalie Munroe is only 30-years-old. She’s been teaching English at Central Bucks East High School in the suburbs of Philly for only a few years, and already she’s sick and tired of kids. . . so sick, in fact, that she’s used some choice words on her blog to let the world know what she really thinks of teenagers. Her blogging got her in some big trouble and she’s now suspended from her job as school administrators try to figure out what to do with her.

I found out about Munroe last Thursday morning as I read a news story about her online rants. She wrote – among other things – “My students are out of control. They are rude, disengaged, lazy whiners. They curse, discuss drugs, talk back, argue for grades, complain about everything, fancy themselves entitled to whatever they desire, and are just generally annoying. Kids, they are disobedient, disrespectful oafs. Noisy, crazy, sloppy, lazy LOAFERS.” Hmmmm. Is she right?

In the circles I run in we sometimes have a hard time telling the truth about children and teens. The eternal optimists among us think things are just great with kids. Don’t worry about the stats. And the bad stories you sometimes hear? Well, they’re so few and far between that they’re newsworthy when they do happen. Those horrible stories are only about a select few. On the other side, there are those who see a demon (or a teenager maybe) behind every rock. When it comes to youth culture and those who inhabit it, these eternal pessimists don’t have any room for even a small ray of light or glimmer of hope. I think we need to land somewhere in-between. . . in a place called Biblical realism.

Taking a posture of Biblical realism does two things. First, it affords us the perspective of seeing things – as best we can – as God sees them. From this perspective we are able to be anchored to a good and proper understanding of right and wrong. Second, it allows to keep our eyes focused on the issues to see those issues for what they really are. . . that’s realism.

I don’t know Natalie Munroe and I don’t know what she’s faced in the classroom. I’m going to guess that she’s a teacher who cares for her students and wants to see them learn. Young teachers who get frustrated over things like this usually are. I’m also guessing that what she’s blogging about is a reflection of her personal experience with a group of kids who represent a generation that researchers tell us are narcissistic, entitled, and willing to settle for much less than the best. She’s frustrated. I read about that generation every day. And, during my limited time in the classroom over the course of the last ten years, I have to admit that I’ve been seeing it as well. There’s a declining respect for authority and responsibility. The quality of work has declined. The work ethic is dictated by me, myself, and I based on how well or how not-so-well I feel like I want to do at this moment in time.

If the fundamental problem of every kid in every generation is the same as it always was – that is, dealing with their own sin and bent towards worship of self – then the unique way this current generation is living that issue out might just be through the personification of mantras like “this sucks,” “screw you,” and “whatever.” And if kids are the “vehicles” moving in that direction, then over-indulgent and child-centered parents (that’s a funny term, huh?) are the ones fueling the ride. When life works like that it really isn’t working at all because, after all, that’s not the way it’s supposed to be.

If I didn’t care about and love kids I wouldn’t be doing what I’m doing. If I didn’t want the best for kids – my own and others – then CPYU wouldn’t even exist. At the same time, the kids aren’t alright. Nobody who seriously knows kids and their world can’t say anything but that. So, we have to look at it all and call it what it is. No denial. No excuses. No covering it up or toning it down. Maybe that’s why we need to at least listen to and consider what Natalie Munroe is saying.