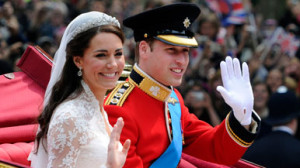 “Enough already, OK???” I’ll admit it. I’ve been thinking that about all the attention the events of today’s wedding have been getting since the day we knew there was even going to be a wedding. Not surprising, since the British monarchy and the fascination people have with it have always left me scratching my head. My apologies to those of you who live under the Crown. I’m just a stupid American. I really don’t get it. Unlike billions of people around the world, I was snoring away this morning when all the pomp and circumstance commenced.

But I did wake up in time to catch the last 15 minutes of the ceremony in the church and I have to admit that the music, the ritual, and the seriousness that I saw did send a little chill up my spine. In a world where more and more of our church architecture looks like the local Regal Cinema and more and more of our worship music sounds like it could have been written for Justin Bieber, it’s nice to get a sense of “otherness” once in a while. . . or maybe even a little more often than that.

It was during those 15 minutes that the light bulb went on in my head. I’ve been wondering why so much of our time and attention (and even money) has been spent on this thing. It was refreshing last night to tune in to the NBC evening newscast to hear Brian Williams say that the network changed their plans to broadcast from London in order to bring us news about the devastation here at home in the south. I was also pleased to open my morning paper to see a huge photo of tornado damage in Alabama, rather a picture of the royal couple, although I wish that damage had never occurred. Those horrifying images serve to remind us that we live in a horribly broken world where things are not the way they’re supposed to be. They are not the way they once were. And whether we know it or not, we all yearn (“groan” is the word Paul uses in Romans 8) for things to be put back together again. . . which someday they will. That’s why so many of the clips from last night’s news featured people in tears. . . hands clasped to their faces in shock and awe. And that might just be one of the reasons why billions of people have been engaging in this grown-up game of playing Barbie and Ken with the new royal couple and their marriage. It’s like a fairy-tale where things turn out right and people live happily ever after. Of course, the events that followed in the years after the last big royal wedding debunk that myth, reminding us that even princes and princesses are broken people who also live in a totally broken world. I’m sure it will in some way be that way for this new couple as the years unfold. That’s life in a fallen world.

All that to say. . . maybe all the starry-eyed time and attention we’ve invested in today’s wedding and will continue to invest in this young couple is something that is explainable and understandable. Could our fascination be evidence of our deep yearning? Could it be that it’s all evidence of the fact that we all long for that day when all The King’s horses and all The King’s men and women will be a part of seeing The King finally put everything back together again?