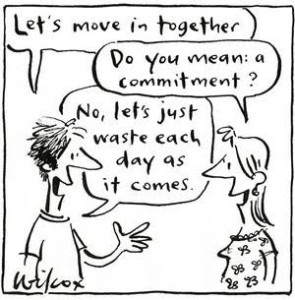 Late Friday night I was engaged in a furious round of channel-surfing when something caught my eye. . . which I’m a bit embarrassed to admit I stopped on. It was a Royal Wedding discussion led by Joy Behar. Included at the table were Joan Collins and two other people who I’m somewhat proud to say I didn’t know. I’m proud to say it because. . . well. . . I just admitted that I know who Joy Behar and Joan Collins are. . . and I stopped to watch and listen. Maybe not knowing one pair cancels out knowing the other pair. However, nothing cancels out the fact that I decided to watch.

The discussion had a bit of roast-like flavor to it, as Behar took snarky shots at the customs of British royalty whenever she could. At one point, Behar asked an interested question about whether or not this marriage would last, especially with the royal family’s track-record of infidelity and divorce. Someone mentioned that Will and Kate have been together for a long time already, and that they had spent time living together. Again, this was all news to me, as I’m not a follower of Britain’s famous soap opera. In an effort to find out more, I decided to do what all good researchers do. . . and I Googled it. Yep, they lived together. . . which might explain the smirks on their faces as they stood at the front of the church with the also-smirking Harry. Maybe it’s just me, but it was almost like they were putting up with going through the motions because they had to.

My Googling episode quickly took me to an article in The Telegraph: “Royal Wedding: Archbishop backs William and Kate’s decision to live together before marriage.” Statistically, that decision puts William and Kate in the majority. Last Wednesday’s USA Today ran a front-page story on couples who live together and then break up. Not surprisingly, the article reports that the break-ups are like a divorce. The article also reports that more than 60% of married couples live together before walking down the aisle. Truly, a sign of the times. . . and a reality that requires the attention and response of the church.

In William and Kate’s case, it seems the church has responded. And the response of the church to William and Kate is also a sign of the times. The article in The Telegraph includes some quotes from Dr. John Sentamu, the Archbishop of York. It seems that Sentamu justifies the couple’s living arrangements because like other modern couples, they want to “test the milk before they buy the cow.” That’s from a leader in the church who was talking about the Prince who will someday become King. . . and when he does, also become the head of the Church of England.

In a way, William and Kate are only being faithful to the worldview they’ve been swimming in since the days they were born. Maybe the bigger problem is one with us – the church – as we fail to exercise a prophetic presence in a world where things are not the way they’re supposed to be. Could it be that we’re living in a day and age where people truly don’t know any better for the simple reason that nobody’s ever told them about something better?