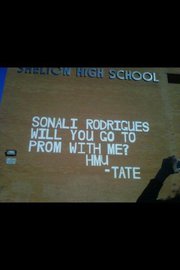 Have you caught the story about Shelton, CT high school senior James Tate? He’s the kid who posted some foot-tall cardboard letters on the wall near the school’s entrance. The letters spelled out a prom invitation to a fellow student: “Sonali Rodrigues, Will you go to the prom with me? HMU -Tate.” No profanity. No paint. Just a little old-fashioned creativity and fun.

But school officials didn’t like what Tate did. It seems they called him into the office and told him he had earned a one-day in-school suspension for trespassing, and that since he was suspended after April 1, he wouldn’t be allowed to attend his prom.

Now, word is spreading far and wide about Tate and his punishment, and lots of people are lobbying for Tate to be able to attend his prom. There’s even a Facebook page that’s been set up to support Tate and see the school’s decision reversed.. As of this moment, over 100,000 people have “liked” the page.

I understand that schools need rules. In today’s world, it’s a sad fact that schools need even more rules because fewer and fewer parents are making and enforcing rules. When we don’t step up and take responsibility for ourselves, more rules are needed. But have we gone overboard with all this “no tolerance” stuff that issues immediate consequences without individual consideration or grace? You know, the kind of thing that happens when kindergarten kid gets suspended for having an aspirin in his backpack.

So. . . here’s the question at hand: Should James Tate be allowed to go to his prom? What do you think?