Never did anyone accuse me of spending too much time on my homework. Nobody. Not teachers. Not my parents. Not even me. To be honest, I put in more time during my middle and high school years plotting how to NOT have to study and still graduate, rather than working hard to do my best. My teachers all could have used the same rubber stamp (“Walter does not work up to his ability”) and saved themselves some time commenting on my report cards.

Perhaps that’s why all this talk about what’s happening in South Korea is so foreign to my own experience. The work ethic woven in and through Korean youth culture is off the charts. A few months ago I had the opportunity to speak at a Christian Camping training event in the Midwest. During one session, a South Korean couple relayed just how different things were back home. One of the greatest threats to youth ministry, building relationships, and spiritual development was the growing obsession with academics. The wife even told us about how she had been hired to conduct late night tutoring sessions for children as young as elementary age. As I listened, I realized that some of today’s South Korean kids were up studying at a time that – when I was their age – I had already been asleep in bed for four hours or more. 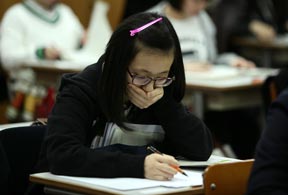 I caught a news story this morning that reports on how South Korean children score among the highest in the world on standardized reading and math tests. The price for their success is what has now been labeled “educational masochism” as they punish themselves by studying and overstudying in preparation for university admissions tests. The pressure is so great that private tutors and test-coaching-schools abound. The government is so concerned about what’s happening that they’ve instituted and are enforcing a 10pm curfew on coaching school classes and tutoring sessions. Some of the schools have shuttered their windows to keep going. But there’s now a six-man force in Seoul that conducts after-hours raids in an effort to enforce the curfew.

Of course, the article cites the great irony that exists when one compares American students to South Korean students. Over here, we want our students to study harder in order to be more like them. Over there, they want their students to study less to be more like us. Hmmm. I remember people trying to use those kind of motivational tactics with me: “Walter, why don’t you study more like_______?” Could it be there there were high-achieving kids in my school who may have heard their parents say something like, “Why can’t you be more mediocre like Walter?!?”

The story should serve as a warning and reminder for our need to strike a balance. On the one hand, we shouldn’t be creating a culture of educational masochism that leaves our kids pushing harder, harder, and harder to the point of burn-out, self-destruction, and realizing self-serving goals. On the other hand, we need to be encouraging our kids to work to realize their full-potential as they study to the honor and glory of God.

I’m wondering. . . what trends are you seeing among the students you work with? Are they pushed? And if so, who’s pushing them? How are you working to instill a balance and to teach them to pursue their academics Christianly?