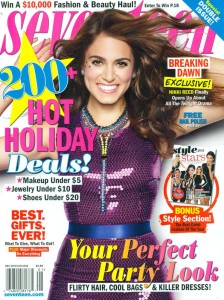 There she is. . . smiling at me from her perch on the magazine rack at Barnes & Noble. Everything about her looks absolutely perfect as she stares off the cover of the December 2011/January 2012 edition of Seventeen magazine. Her name’s Nikki Reed. She caught my eye because she was the co-writer and co-star of the semi-autobiographical 2003 coming-of-age film, Thirteen. The irony is that her cover photo captures the hair, eyes, skin, nose, lips and chin every pre-teen and teenage girl covets as they struggle through their pre-teen and early-teenage years. Her face is framed by teasers trumpeting this month’s Seventeen content. They direct readers to look inside to learn about fashion, beauty, and “your perfect party look.” This and every other teen girl magazine cover sets the “appearance bar” higher and higher for our kids.

It shouldn’t come as any surprise that a growing number of kids who are developing physically during the transition from childhood to adulthood compare what they see transpiring in the mirror with what they see on the covers of the magazines. Of course, that’s the way the marketers want it. The sad result is a generation of kids who buy the lies that “I am what I look like” and “if I don’t look like that I’m worthless.” This reality is not only feeding the epidemics of eating disorders and depression among children and teens, but is also feeding the dissatisfaction that’s leading a growing number of kids to pursue cosmetic procedures and plastic surgery in an effort to improve their physical appearance.

Plastic surgery is certainly nothing new. It’s a legitimate branch of medicine that is dedicated to restoring or altering the human body. It is used to reconstruct and correct abnormalities caused by birth defects, developmental problems, injuries, infections, or disease. It’s also used to cosmetically reshape body structures in an effort to improve appearance and feelings of self-worth. According to The American Society for Aesthetic Plastic Surgery, there has been an over 155% increase in the total number of cosmetic procedures. In 2010, over 2 percent of cosmetic procedures were performed on children 18 and under with the most popular procedures being otoplasty (cosmetic ear surgery), rhinoplasty (nose jobs), and breast augmentation. In addition, teenagers are seeing cosmetic surgeons for liposuction, otoplasty (reshaping of the ears), breast enlargement, breast reduction, breast lifts, collagen injections, microdermabrasion, and chemical peels. Teens in South Korea are flooding cosmetic surgeons with requests for procedures that enlarge the eyes. And believe it or not, there are reports that a growing number of girls here in the U.S. are getting breast enlargements from their parents as high school graduation gifts!

What’s fueling this growing trend that’s not expected to slow down anytime soon? A look at today’s youth culture reveals several reasons for our teens’ love affair with cosmetic procedures.

First, there is the intense and pervasive presence of image pressure. In a Bliss magazine survey among British girls with the average age of 14, two-thirds of the girls surveyed said “the pressure came from celebrities with perfect bodies and boys.” Girls who compare themselves to the never-ending onslaught of images know that to be acceptable is to be young and to be beautiful. The boys have bought the lie as well. If they see themselves as not good enough and there’s the possibility of getting better, they’ll pursue it with little or no regard for the cost. Cosmetic surgeons report that more and more teens are showing up holding celebrity photographs that capture the appearance they want for themselves.

Second, our kids are growing up in a media culture where an endless number of shows – especially “reality TV” – trumpet and glorify the possibilities and merits of cosmetic alteration. They know it can be done.

Third, our teens live in an instant fix society. If something’s broke, hurting or not right, there’s a pill, prescription, or procedure available to make it right. Because they want to avoid emotional and physical pain, they’ll opt to do anything that makes them feel and/or look better.

Fourth, our culture is extremely narcissistic. This reality is certainly not limited to today’s youth culture. We’ve all learned to selfishly do “what’s best for me.” If I’m growing up with my eyes focused on myself and my needs, it’s not at all surprising that I’d want to fix anything that I don’t like about me.

Fifth, peer pressure is extremely powerful. When our teen’s peers, boyfriends, and girlfriends buy into the appearance pressure, they will in turn pressure our kids to buy the lies that so easily lead to the desperate and vain measure of cosmetic procedures.

Finally, parental pressure plays into the mix as well. It should come as no surprise that many teens who feel the pressure to change their appearance have learned from parental example. Liposuction and breast augmentation are the top surgical procedures, and botox injections are the top non-surgical procedure for both men and women alike. That example, coupled with our criticisms of our teens (“You look like you’re gaining weight.”, “You’re skin looks so pale.”, etc.) can lead our teens to desire and choose the plastic surgery option.

What can youth workers and parents do to instill a healthy sense of physical self in children and teens so that they will avoid the growing obsession with plastic surgery?

First, we must communicate that plastic surgery, while sometimes necessary for one’s physical health, is not the road to redemption. Our dissatisfactions with ourselves are rooted in a yearning for God and His gift of new life. No surgeon’s knife, Botox filled needle, or miracle cream can fill the God-shaped hole in the soul. Plastic surgery is a redemptive dead-end that leaves you feeling empty.

Second, we must teach our kids that aging and death are theological realities that can be fought, but never beaten. Humanity has been cursed to physically age and die since the rebellion of Adam and Eve. Try as hard as we like, those realities can never be reversed on this earth. It’s a fact that time and gravity are not especially kind to the human body. Consequently, they need to realize that a growing number of people in our culture are locked into an anti-aging exercise in futility.

Third, we must shoot straight with our teens about the risks related to plastic surgery. A simple search of the Internet uncovers stories and warnings about the very real dangers of some of the most popular cosmetic procedures sought out by teens.

Fourth, we must teach our kids about the seductive power of advertising. They need to know that marketing is designed to seize on and magnify their insecurities. Then, marketers make product promises that translate into “needs” that lead to purchases. This vicious cycle is formulated and reformulated every day for one reason. . . .getting our kids to spend their money. As parents, we must teach our kids to recognize and understand the lies ads tell and sell. (Here’s a link to a helpful list of questions you can use with students to filter ads “Christianly”).

Fifth, we must never lose sight of the fact that in God’s grand scheme, suffering builds character. Even though the “perfect appearance” is an always changing cultural construct, our kids still buy the lie, feeling like they don’t measure up. But if we heed the words of James, we soon realize that the suffering of not measuring up or being “imperfect” is part of the growth and maturation process: “Consider it all joy. . . . whenever you face trials of many kinds. . . . the testing of your faith builds perseverance.”

And finally, we must affirm kids’ value and worth as God has created them. When I was a teen I never liked what I saw in the mirror. Sure, the pressure wasn’t nearly as great back then. But when we were kids the pressure was there. Nothing meant more to me than to know that even though I felt I fell painfully short in the eyes of the world, I was loved and accepted by my parents and youth worker. Over time, that message finally got through and I came to realize that my “flaws” were really only unique differences (please remember that next time you look at my picture!!). 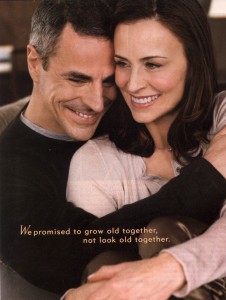 A few years ago I ran across this ad for Botox that features a middle-aged married couple locked in an adoring embrace. The ad wants me to believe that they were “perfect” in appearance. The ad’s text reads, “We promised to grow old together, not look old together.” What a tragedy. If I can communicate God’s radically different message on appearance to students, I trust that the growing obsession with plastic surgery won’t hit home for the kids I know and love. I pray the smiling young faces I see around me will reflect the image of Christ, and not the images on the front of the magazines.