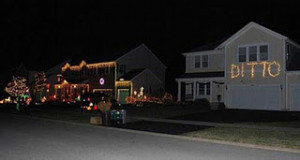 We’re late. . . again. Still don’t have a tree. No lights up outside. I haven’t even gotten them down from the attic yet. Maybe tonight. This all reminds me of something that happened a few years ago when we were late with our Christmas preparations. When my then 19-year-old son arrived home from college, our lack of preparation caught him by surprise and got him a little bit irritated. The fact that the tree wasn’t yet in the house and we hadn’t baked any cookies caused him to verbalize his disappointment in us with this: “It doesn’t smell like Christmas!” He had just come off a difficult finals week and he was looking forward to the comforting sights, sounds, and smells of our family Christmas that he had come to treasure before heading off to college. We had let him down.

His statement got me thinking beyond the scent of pine needles and fresh-baked ginger cookies, to another way so many of us are letting our kids down these days. Not coincidentally, it has to do with Christmas. We’re reminded every year at this time of the coming of the Savior, Jesus Christ. As a Christian father, I’ve been entrusted by the Savior who came and who transformed my life, with the awesome privilege to embody the message that He is savior and Lord in all my comings and goings with my kids. That Christmas, with my son just home from college,yet ready to move out of his teenage years, I wondered if my life had served him well, “smelling,” if you will, like Christmas as he grew up under my care.

I often wonder how well we – Christian parents – have lived out this God-given responsibility. Generally speaking, today’s teens are a consciously spiritual bunch. Perhaps more than any other generation in recent time, they are on a deliberate quest to understand and embrace faith. While this is good news, it comes with a set of distinctive issues related to our unique culture and times. Because swimming in the soup of our times is pushing more and more kids away from a belief in absolutes and transcendent truth, orthodox biblical Christianity is not only not embraced, but is often looked down on with scorn. Christianity is rejected because Christians believe they alone have spiritual truth. Consequently, more and more kids struggle with Christianity’s exclusivity. In addition, the emphasis on feelings over and above rationality leads our teens to look for a faith system that is emotional. Globalization and immigration have opened the door for a variety of previously foreign and unfamiliar faith systems, especially various forms of eastern spirituality and mysticism, to find a new home in North American youth culture. All this has combined to create an environment where our kids step up to the spiritual buffet table to load their plates with a personally created faith system that combines a variety of elements into a personal mix put together to satisfy their spiritual palate and hunger. Because each individual has the freedom to choose what they want for themselves, varied day-to-day tastes allows them to change and adapt from day to day. Every plate is custom made by the individual consumer. No two meals are alike. To those observers who are more rational and logical, the ingredients on individual plates are often seen to be incompatible. But to young people, they have been given the freedom to be consistently inconsistent and they see no contradictions.

This individualized spiritual journey has had a profound effect on the faith adopted by our self-described Christian teens. Christian Smith’s groundbreaking research on teenage spirituality reports that 84 percent of teenagers in the United States believe in God. At first-glance, that encouraging number seems to indicate that our efforts to lead our kids to faith in Christ have been working. But a closer and more careful look at the study’s data indicates we should stop congratulating ourselves, and start getting concerned. Shouldn’t we be thrilled that more than 8 out of 10 teenagers believe in God? Not after reading the results of Smith’s research. The real question is who or what is the God they believe in? The research concludes that their God and their faith isn’t in the God and faith of the Bible, the one who sent His Son, Jesus Christ, into the world. Rather, it is what Smith labels as “Moralistic, Therapeutic, Deism.” In other words, kids believe that to be a Christian means that they are to be good people. They believe that God exists to serve them by helping them to feel good, happy, secure, and at peace. And, they believe that even though God made the world, he’s only active and involved in our lives when we need him to resolve a problem. In reality, only 8 percent of teenagers “believe in God, attend religious services weekly or more often,” hold faith to be “important in their lives,” regularly “participate in religious groups,” and “pray and read the Bible regularly.”

The reality of emerging teen spirituality is that “the majority of American teenagers appear to espouse rather inclusive, pluralistic, and individualistic views about religious truth, identity boundaries, and the need for religious congregation.” This explains the rise of teenage interest in New Age mysticism, Buddhism, Islam, Hinduism, Kabbalah, Wicca, and other spiritualities. When it comes to those who claim to be “Christian,” that brand of Christianity is becoming distorted and secularized. Smith says that “Christianity is either denigrating into a pathetic version of itself or, more significantly, Christianity is actively being colonized and displaced by a quite different religious faith.” More and more teens who have been raised in Christian homes or who have embraced Christianity are adding other spiritual elements to their plates. It’s not uncommon to encounter a teen who believes that Jesus was the son of God, believes in the virgin birth of Christ, believes the Bible is the word of God, and also believes in reincarnation, reads and follow their horoscope, and sees no contradictions between any of these beliefs. In addition, many who hold to a more orthodox and biblical Christian faith have embraced it as something they do from time to time, rather than someone they are all the time. Instead of integrating their faith into all of life, they live a dis-integrated faith that only touches select parts of who they are. Consequently, their stated beliefs may be separated from how they view and respond to authority, how they conduct themselves in dating relationships, who they are as a student or athlete, etc.

Why is all this so important for us to know? For the simple reason that we are getting ready to celebrate the coming of the Savior, and because our greatest responsibility to our teens and the surrounding culture is to consistently talk about and live out the Incarnation of Jesus Christ. They were made to follow Him. Are you spending time each day in God’s Word, building your relationship with Him? Are you spending time every day in prayer, asking God to change you and your teens into His image and likeness? And, are you prayerfully living out the will and way of God in every area of your life with dependence on God’s Spirit? If you are, then your house “smells” like Christmas all year long.