Thanks to a very generous friend of CPYU, now I’ve got a dilemma. While making a point about the speed of technological advances, I mentioned publicly during a seminar that the iPad 2 is out and I don’t even have an iPad 1. A couple of days later I get an email from this friend who was at the seminar announcing a donation to our ministry that is to go towards the purchase of two. . . count them. . . TWO! . . . iPads for use at CPYU. Wow!

Since we never had the funds for an iPad, I never took the time to research them or to look at how to best utilize one here at CPYU. After all, why feed info to a covetous nature?!? But now that the money’s there, it’s time to get to work. So I start to research. Apple versus Android. iPad versus Galaxy. Oh man. . . this is getting complex. 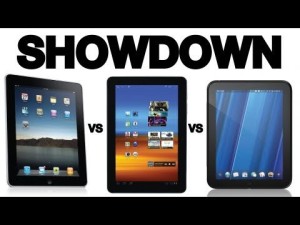 At this point, I know my “Jobite” friends are going to come at me full steam ahead. “Why are you even taking the time to ask the question?”, they’ll tell me. (Go ahead. . . post your comments!). I know I’m setting myself up here as most of my friends in the youth ministry world have volunteered. . .no, paid! . . . to be spokespersons for Apple. Why in the world would I ever even consider anything but an iPad? Sounds a little bit like iDolatry to me.

Some might say I’m asking all the wrong questions in preparation to make a decision. Which platform meshes better with a PC? . . . after all, that’s what we run here at CPYU. Which device has the most versatility? Which device can we best employ for our research, presentation, and travel purposes? Which one is less likely to break when – not if – I drop it? I’ve got lots of questions.

So, the other day a young computer wizard comes in to our office to talk about some other tech issues with Chris Wagner. I walk through the room and notice he’s clicking away on an iPad. He obviously knows scads more than I do about technology so I ask him if he would be willing to stick around when he was done so that I could ask him a question. The question? . . . “Why should I get one of those (as I point to said iPad) as opposed to. . . let’s say. . . a Samsung Galaxy?”

He responded by thinking out loud and offering an objective comparison of the two devices. Then he smiled and giggled a little a bit. That was before he said something like this. . . “If you walk into a Starbucks holding this (as he pointed to said iPad), more people are going to notice.” In other words, my “sexy cool” factor would increase exponentially. . . which in my case really doesn’t matter that much at all. . . since 10 times zero is still. . . well. . . you get the point.

The fact of the matter is that I’m way beyond worrying about amping up the sex appeal and cool factors. . . at least I hope I am. If I’m not, I should be. Which got me thinking again about the constant battle our culture throws us into over pursuing style rather than pursuing substance. It’s happening big time in the church. It’s happening big time in youth ministry. It’s happening in our very lives. And, we wear sometimes pursue and choose brands/technology not based on what it will do for us, but on what it will do for us in the eyes of others. Make sense? Come on. . . we all do this at some level.

A few years ago my buddy Jay Delp said something that opened my eyes to this stuff. We were standing on a Denver street outside our hotel at the National Youth Workers Convention. Jay had his ever-present video camera hoisted onto his shoulder as he walked towards us. “Hey Jay,” I said. “We’ve got some money to buy a nice high-quality video camera at CPYU. Why would I need that big thing you’ve got as compared to the smaller camera we’re looking at?” After hearing about the camera we were considering, Jay simply said, “They’re almost identical. Cameramen, however, think this one will make you look more important when you walk into the room.”

And while you’re thinking, this commercial captures a little bit of what I’m talking about.