Yesterday long-time Philly sportswriter, Bill Conlin, stepped down from his job after being accused of sexually abusing children back in the 1970s. The accusations against Conlin are serious – very serious – and so they should be. Sadly, law enforcement agencies across our country are burdened with sexual abuse cases involving children. . . . and it’s getting worse.

And yesterday my adult daughter texted me this photo. She took it in an Abercrombie & Fitch store while shopping near Philadelphia. It’s a photo of a photo that sits on a fragrance display in the store. 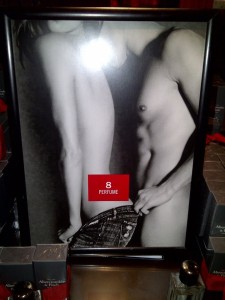 This all got me thinking about just how mixed up and messed up we are as a culture. We stand up and intervene – as we should! – when children are violated and taken advantage of by sexual predators. But then we joyfully and without batting an eye let others prey on children’s hearts and minds through imagery, art, song, film, etc. At times, we even applaud it and call it “cute” (see yesterday’s blog). I wonder too, if a steady diet of this stuff during the “wonder years” doesn’t socialize, nurture, and even create the kind of stuff that law enforcement has to deal with when those children become adults.

The A&F ad should make us think. Kids of all ages paraded through that store the other day. Some were with their parents. Some weren’t. Who knows how many glanced at that photo. It’s become so common that few, if any (I’m guessing) even stopped to stare. Did anybody even care? But what would have happened if – let’s say – a man my age was sitting alone on a bench in the mall just a few feet from the entrance to the A&F store. . . and that man was holding a small copy of that photo in his hand. . . and that man was calling children and teenagers over to the bench to take a peek at his photo? See what I mean?

Perhaps the greatest irony of it all is that A&F has been filled of-late with scores of people buying gifts for others in celebration of the coming of Christ. . . the one who came to undo this mess and bring Shalom.