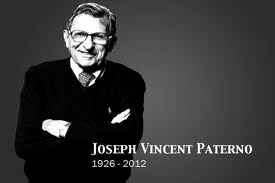 Somehow we all sensed that the craziness, confusion, and complexity of the Jerry Sandusky matter would break him down. Sure, Joe Paterno was already aging. But when the announcement came that he had lung cancer, I remember chatting with a friend about the fact that “this might kill him.” What we meant by that is that the piling up of multiple burdens would weigh him down and wear him out. Stress is a tricky, powerful, and dangerous thing.

Since the accomplished football coach died on Sunday, the media and Internet have been filled with remembrances, memorials, and debates over what the man’s legacy will ultimately be. One thing we’re hearing and reading over and over again is the way Joe Paterno sought to instill life lessons and character in his players, his team, and his institution. At heart, I think Paterno evidenced an old-school modesty and thrift that we don’t see so much anymore. He made millions, yet continued to live in a simple ranch home in State College. That’s refreshing. His present and former players are uniting in a chorus of praise that doesn’t seem to be coming from polite respect in the wake of a death, but from genuine heartfelt love for a man who shaped their lives. If one thing is clear, it’s that Joe Paterno endeavored to teach more than football. That’s a great legacy.

Sadly, there are some other lessons that can be learned that I’m sure nobody expected to be learning from Joe Paterno and the circumstances that overshadowed everything else during his last couple of months.

First, there’s the lesson that life is brief and fleeting. I don’t know if Joe Paterno coached longer than any previous college coach, but he coached for a long, long time. He coached long enough to win more games and acquire more accolades than any other Division I football coach. But now it all seems like a blink of the eye. On Sunday, we sang these words from Isaac Watt in his hymn “O God, Our Help In Ages Past”: “A thousand ages in thy sight, are like an evening gone; short as the watch that ends the night, before the rising sun.” Yes, life is short. If we fool ourselves into thinking otherwise, we might put off the serious business of living each day as we should.

Second, we can never be fully prepared for the unexpected circumstances and situations that life throws us, but they will come. And because they will come, we need to be as ready as we can be to face them. While we don’t know the particulars, we know they will be. If you’ve ever been through the detonation of a circumstantial “bomb” that’s been carefully built and detonated by someone you trust, you know just what I’m talking about. In this case, it’s family members, friends, and co-workers who saw and heard things they never expected and really didn’t want to believe. This is a common-thread in stories of sexual abuse and secret affairs. I sometimes wonder if we don’t have some kind of default setting that kicks in during times like these. . . . something that fools us into believing that we didn’t see or hear what we just saw or heard, or that tells us that “this person could/would never do that thing.” But we need to realize that in a broken and fallen world filled with flawed human beings (everyone of us), stuff happens. And while denial might be our initial reaction, we need to fight it in order to see the truth. When one fills themselves with the truths of God’s Word, it’s healthy realistic thinking that is more likely to prevail, over and above the positive thinking that we somehow think will push back what’s happened in a mind-over-matter way that we think will make good prevail while erasing what happened. In Joe Paterno’s case, I really think he was so blown away by something so unbelievable and so unfamiliar, that he didn’t initially know what to do.

Which leads to number three. Over the course of the last year or so I’ve been listening and re-listening to Tim Keller’s incredible sermons on Wisdom from Proverbs. Amazing stuff. Keller says that wisdom is “not less than being good or moral. . . but it’s a lot more. It’s being so in touch with reality that you know the right thing to do in the large majority of life situations that the moral rules don’t directly address.” In Joe Paterno’s case, one could easily argue that there were moral rules that apply. I agree. But the lesson here about wisdom is that it needs to be carefully sought out and cultivated. The source of that wisdom lies in our Creator. The sovereign God of the universe has made it possible for us to cultivate and nurture that kind of wisdom into ourselves. Of course, we’ve got a culture that pushes back with effective propagation of foolishness. That’s all the more reason to develop and understand Godly wisdom.

These are the lessons I’m forced to ponder today. . . lessons sparked by a news event that should have us all thinking and talking.