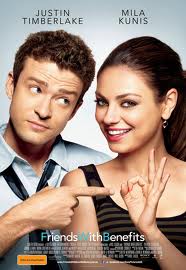 I’m a stickler for watching a film from start to finish. I can’t do the “let’s stop it here and pick up on it tomorrow” thing. I did, however, do that with the Justin Timberlake and Mila Kunis film, Friends With Benefits. In fact, it took me two weeks to watch the popular-with-the-younger-set romantic comedy. I started in Massachusetts, watching the first 35 minutes. I finished the film a few thousand miles away in Alberta, Canada. . . yesterday. I’m still trying to process what I saw.

When I began the film two weeks ago, I had to shut it down. That rarely happens to me. But I had gotten to the part where the two self-described “damaged” main characters – who had just met, by the way – decided to indulge their bio-chemistry and hormonal urges void of any kind of love, emotional ties, or commitment. What I saw onscreen was happening under the covers. But it was explicit and ugly. Unlike the redemptive sexual scenes in films like Magnolia and American Beauty where sexual indulgence outside of God’s intended design is portrayed as it is. . . incredibly empty. . . this scene was bothersome to me in a different way. I’m still trying to figure out how to put it all into words. Perhaps it was a combination of factors. . . . one being its portrayal of a deeply embedded cultural trend (friends with benefits – a kind of ongoing one-night stand), and the other being the fact that their characters – Dylan and Jamie – seemed to be enjoying themselves with absolutely no sense that what they were doing might be wrong.

As always, I look at cultural artifacts as both “maps” and “mirrors.” Those vantage points also led to some dismay on my part. As a map, there’s enough in this film to draw young viewers in but not enough to make them think about what they are watching. It’s a simple and formulaic film. In fact, it’s one of those films that effectively gets you rooting for the characters to do wrong. I’m sure most viewers enjoy the movie. . . which means that its ability to define life and set standards is even more powerful. As a mirror, it offers us a peek into how the sexual revolution of the 60s has taken root, grown, and produced fruit. I’m sure most viewers haven’t thought twice about the film and its message. Instead, they’ve mindlessly consumed it as pure entertainment.

After mentioning my difficulty to several friends since first shutting it down, I decided to follow their suggestions and see the film through to the end in the hope that there would be something redemptive. I put my focus on the troubling parts aside and found a few things. Sex isn’t seen as a bad thing. Reality is, it’s a good thing given to us by God. . . even though the characters don’t know that part. The film eventually reminds us that sex void of love and commitment is empty, mechanical, and never fulfilling. It might feel good for a few moments, but in the end, you’re right back where you started. . . needing to fill an even bigger void than the one that drove you there in the first place. When we mess with God’s order (committed monogamous marital love and then sexual intimacy), we mess things up. Reverse that order, and things don’t work. And finally, nurture and environment do shape us. Children of brokenness and divorce – in this case Dylan and Jamie – are not only confused by relationships, marriage, and sexuality, but they are suspicious that any of them can work as they are supposed to. . . a factor that feeds the whole “friends with benefits” phenomenon in today’s youth and adult culture. 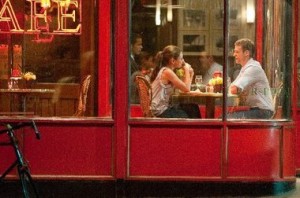 In the end. . . and I’m going to ruin it for you . . . Dylan and Jamie do decide that the whole “friends with benefits” thing doesn’t work. They realize they are falling in love and they need to start over. Dylan expresses his desire to get to know his “best friend,” not even caring if they ever have sex again. And so they embark on a date to a cafe. And just as we look through the window at the couple starting over on a “get to know you first date” while sitting across from each other at a small table, it all quickly unravels as Dylan looks at Jamie and says, “So. . . yeah. . . f___ it!” The two jump to their feet, throw everything off the table in a heaping crash, and start to passionately kiss. . . then the screen goes black and the credits start to roll. And so, we’re right back where we started. This time, however, we’re told it’s OK. Perhaps that the most powerful message the film sends.

Yep. . . Friends With Benefits is one of those cultural maps and mirrors. It deserves our attention. My biggest takeaway is this. . . I’m afraid that closing line uttered by Dylan just might be the mantra we say and live in relation to God’s life-giving will and way in all aspects of life. It’s not really anything new. That’s what got humanity in trouble in the first place. I can hear Adam and Eve uttering those same words in the Garden. My life has spoken those words far too often. But there’s something different about hearing those words in today’s cultural context. Maybe we used to know we shouldn’t be saying them. Now they’re words of virtue rather than words of vice. . . and it’s an ethos that’s spreading far and wide.