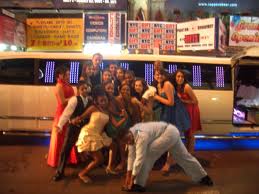 I didn’t go. There’s no way my kids will ever believe it was for any reason other than I couldn’t get a date. They believe that because they’ve seen my senior picture. The real reason – which I can’t convince them of! – was that I was just way too cheap. My high school peers were surprised by my decision to skip the big night. “Why?” they asked. My answer was honest, short, and to the point: “I’m not spending $75 on someone I’m not going to marry.”

Judging from what I read in yesterday’s USA Today article – “Prom and (financial) circumstance” – the 2012 high school senior version of myself would wind up saying the same exact thing. The only difference would be the amount: “I’m not spending $2000 on someone I’m not going to marry.”

Hadley Malcolm’s great little article on proms gone wild is eye-opening. “Prom is the new wedding,” she writes. “And spending on the springtime high school dance is climbing within reach of holy matrimony.” It’s not at all surprising. When I was doing youth ministry in the Philly suburbs back in the mid to late 1980s I was stunned by the time, energy, effort, and money the kids were putting into the prom. When I started studying youth culture, promo spending figured big into my material on teen materialism. If the prom is a reliable indicator of our values, attitudes, and behaviors on money and thing. . . well. . . we’re more materialistic than ever.

Just yesterday I read Christian Smith’s chapter on young adult attitudes and behaviors on money and things in his eye-opening book, Lost in Transition: The Dark Side of Emerging Adulthood. The chapter is entitled “Captive to Consumerism.” Smith writes, “What we found is that few emerging adults expressed concerns about the potential limits or dilemmas involved in a lifestyle devoted to boundless material consumption. Most are either positive or neutral about mass consumer materialism. Only a few have reservations or doubts.” Prom night proves that Smith’s subjects were thinking and living this way long before they reached the age of 18.

According to Hadley’s article, families with teens are expected spend an average of $1,078 on prom, up from $807 last year. That number varies based on geography, with families in the northeast (that’s where I live) spending an average of $2000.

Hadley mentions some contributors to the craze. I think she’s right on. When you look at the trends, there’s a perfect storm of stuff converging that keeps us from being dumbfounded by numbers that are now seen as normal. There’s our growing love for narcissism, which is all about a growing idolatry of self that translates into doing anything and everything to promote me, myself, and I. There’s the emphasis on feeling good over and above exercising rational judgment. Since I want to feel good, I can spend, do, and be whatever I want. There’s the generation of parents who want to make themselves look good by making their kids look good. There’s the celebrity culture that is all about style, body image, and looking good. Hadley even likens prom to a high school student’s red carpet moment. Give it a month and we’ll be seeing lots of these red carpet moments popping up on Facebook and YouTube, I’m sure. Then, there’s the constant battle between “deserving” and “debt.” If we think we deserve it, we’re more than happy to go into debt for it. In fact, those with the lowest incomes ($20,000 to $29,000) will be spending more than $2,600 on the prom, which is more than twice the national average.

Now’s the time to exercise some good judgement. Parents, set limits and explain those limits with good reasons. Youth workers, this is a good subject for teaching. . . on materialism, body image, style, narcissism, justice, missions, etc.

By the way. . . my prom night. . . I only spent $8. I remember it as a great evening with friends. That eight bucks bought me ticket to a Phillies game, a soda, a hot dog, a soft pretzel, and loads of fun.