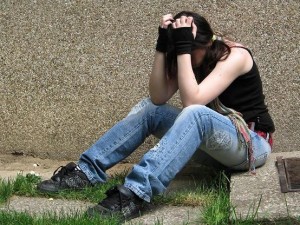 If we care at all about kids we should learn to recognize, understand, and answer these visual cries of a generation longing for spiritual truth, emotional healing, and answers. Self-injurious behavior (SIB) or self-inflicted violence (SIV) has been defined as “the commission of deliberate harm to one’s own body. The injury is done to oneself, without the aid of another person, and the injury is severe enough for tissue damage (such as scarring) to result. Acts that are committed with conscious suicidal intent or are associated with sexual arousal are excluded.” By May 2013, the publication of the Diagnostic and Statistical Manual – 5 is likely to include a new diagnosis – NSSI, or Non-Suicidal Self-Injury.

Since SIB is still stigmatized and usually hidden, accurate statistics on its prevalence are difficult to find. What is known is that the average self-injurer begins at age 14 and continues the practice, usually with increasing severity, into his/her late 20’s.
Among adolescents, the ratio of boys to girls who cut themselves is equal. Most teens and young adults who exhibit SIB are sometimes the ones who you’d least suspect. For the most part, they are bright, intelligent, and generally “normal”. One recent study of high school students in the Western part of the U.S. estimates that between 26 and 37 percent were cutting.

Blood wounded hand bleeds
Red blood makes me feel real
I am alive I feel pain otherwise numb
I may as well be a plastic baby doll until
I cut myself and bleed and see the blood bleeding from the body
Not plastic after all . . . but human babydoll.

Tomorrow: Caring for cutters and some helpful resources.