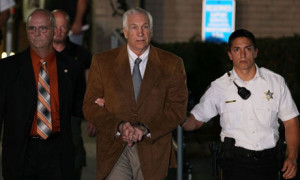 I’ve been trying to figure out what it is about this case that’s played so much with my thoughts and emotions. Perhaps it was the fact that Jerry Sandusky was known in our commonwealth and community as someone who really cared about and looked out for kids. He had spoken with great passion at a fund-raiser for our local Christian youth center. Maybe it was the fact that I had been impressed with his Second Mile foundation and the work it was doing on behalf of kids who needed advocates and help. There was the time in 1999 when I met and chatted briefly with Sandusky at his football camp for middle school players. My son was attending the camp. The photo of my son and a smiling Sandusky is now a bit creepy. And then there’s the way people here worship Penn State football and everything/everyone that goes with it.

Before turning the lights out last night I spent some time watching the online feed from the Centre County Courthouse in Bellefonte, PA. The verdict had been handed down. The image I can’t get out of my mind is the one of Sandusky being helped into the police cruiser and driven off, most likely never to see freedom again. It was difficult to fall asleep as worked to rewind the whole thing in my mind, wondering where, when, and how Jerry Sandusky’s relationships with kids went from healthy and wholesome (if that was indeed ever the case) to horribly sick and twisted.

As we sort through the mess and fallout of this case, here are some initial things to think about. . .

This morning, our hearts should ache for our culture and for our kids. Hopefully it’s even more clear how we should be praying, believing, and working for the Kingdom to come.