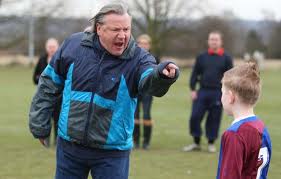 One of my most unnerving childhood memories has to do with Little League Baseball. I remember exactly where it took place and who was involved. . . .Alverthorpe Park. . . on the Triple-A field. My dad was our team’s coach. He made sure that everyone played, that everyone played fair, and that everyone had fun. That’s the way it’s supposed to be.

On the particular spring night that I remember, the coach of the opposing team – a man with an already well-known reputation for flaring up – decided to flare-up over something about the way my dad was coaching. His flare-up escalated to the point where he challenged my dad to a fight. My dad never instigated or responded in a way to egg the man on. Dad turned the other cheek. The man just blew up in a frightening and embarrassing display of emotion in front of a bunch of scared little kids and wide-eyed parents sitting in lawn chairs. And so, I remember it. . . well.

As I recount the episode, I sometimes wonder how my adult self would have responded if my adult self had been present during the incident. I might have passively-aggressively asked him about his childhood experiences related to potty training and breast-feeding. . . which would not have been a good idea. That approach, while not at-all-right or wise, does get at the fact that people who have grown up having too much of something (pain, heart-ache, pressure, entitlement, parental coddling, etc.) or not enough of something else (love, time, attention, limits, consequences, etc.) often-times act out in inappropriate ways. What’s especially frightening in today’s world is that the inappropriate nature of such responses are now becoming more and more appropriate, commonplace, expected, and even accepted. Bad sideline behavior isn’t just limited to those who have histories.

Youth Pastor Greg Dowell recently sent me a link to an article from a suburban-Chicago newspaper: “Angry parent accused of threatening to kill Lisle volleyball coach.” Wow! It seems that John Kasik was a little bothered after his high-school-aged daughter was pulled from a match that her team wound up losing. Included in his outlandish behavior were voice-mail threats telling the coach he was going to rape his wife and daughter and then kill him. Not surprisingly, Lisle was charged with felony telephone harassment and misdemeanor counts of battery and disorderly conduct.

Now that my own kids aren’t playing sports anymore, I don’t get out to the games like I used to. But the few times I’ve shown up to catch a game over the past two months have been eye-opening. The behavior of parents on the sidelines has declined rapidly over the last couple of years.  .  .  so rapidly that it’s noticeable. There are more yellers. And there are more and more super-intense folks who put more stock in what’s happening on the field than they should. It’s not just at the games where teenagers are running around on the field. It’s happening on fields where the players haven’t yet started elementary school!

This is cultural trend we need to watch and derail. . . . in our communities and in our mirrors.

I recently read about a three-decade-long survey by coaches who asked college athletes to think back on their early playing careers. They were asked, “What is your worst memory from youth and high school sports?” The overwhelming response was this. . . . “The ride home from games with my parents.”