You know the drill here at CPYU. . . John Stott’s “dual listening” to both the Word and the world. . . Karl Barth’s starting the day “with the Bible in one hand and the newspaper in the other hand.” Did you happen to do that this morning? If you executed the drill with this morning’s USA Today there’s a quartet of stories that should have captured your attention.

First, there’s the CIA scandal involving General David Petraeus and his extra-marital affair with his married biographer. Petraeus has stepped down. Second, there’s the headline asking, “Is the age of Apple ending?” Third, another story predicts that tomorrow will be a day marked by school absenteeism and calling-in-sick for students and employees who are lining up for tonight’s midnight release of Call of Duty: Black Ops II. Finally, the paper is telling us that “Lack of coolness factor chills school photo sales.”

So what? What difference does it all make? These stories and others tell us much about the human condition, about ourselves, and about how we are choosing to live in God’s world. Think about it. . . 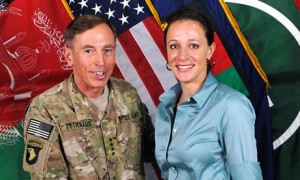 In regards to the Petraeus affair. . . the high-ranking and highly-respected military leader known for his commitment to integrity and leadership had the cover blown off his affair with biographer and West Point alum Paula Broadwell. The sad, sad irony is that Broadwell has advertised herself via social media as a bigger-than-life person whose “most important title is mom and wife.” Petraeus’ own lessons on leadership begin with Rule No. 1 – “Lead by example from the front of the formation.” As with all types of affairs, this one was a bomb that was secretly built by the pair. Now that it has blown-up, countless lives, institutions, relationships, and who-knows-what-else have been changed forever. The fallout will extend far-and-wide both geographically and chronologically. These things are not at all benign. Not only should that serve as a warning to us all, but this is also a story about the universal human condition. As I tell youth workers all the time, we are all just one bad decision away from being a headline. And there’s not one of us who is above making that one bad decision. It’s been almost six years to the day that our CPYU staff sat down to talk about Gordon MacDonald’s powerful written reminder about the assassin that lives in all of us, a reminder he penned just days after news of Ted Haggard’s indiscretions broke. It reminded each of us of our bomb-building bent and potential. . . and to watch-out. . . for ourselves.

Regarding the news on Apple. . . I’m one person who believes that too many of us have put too much emphasis and stock into what we might call “the Apple factor.” Over the years people have turned some great technological innovations and the Apple brand into something synonymous with “cool.” But that’s not the main issues here. What’s most alarming is the fact that we value and embrace “cool” in ways that border on idolatry. As USA today says, Apple has relied on charisma and sex appeal. . . and for that reason perhaps “a short run on top is long enough.” OK. . . but this is more about us than it is about Apple. We elevate them when we value charisma and sex appeal.  In his book A Long Obedience in the Same Direction, Eugene Peterson serves up a reminder of how this kind of mindless thinking and living is not only a recipe for the temporary, but something dangerous as it creeps into our Christian spirituality: “In our kind of culture anything, even news about God, can be sold it if is packaged freshly; but when it loses its novelty, it goes on the garbage heap. There is a great market for religious experience in our world; there is little enthusiasm for the patient acquisition of virtue, little inclination to sign up for the long apprenticeship in what earlier generations of Christians called holiness.”

Then there’s tonight’s release of Call of Duty: Black Ops II. I once had a friend say to me, “You tell me who or what you daydream about, and I’ll tell you who or what your God is.” That was a punch in the gut. We could say the same thing about how we spend our time. No, there’s nothing at all wrong with video games. As Tim Keller would say, they are a good thing. But when we make them an ultimate thing. . . or the thing around which our lives revolve. . . well, then we’ve got a problem.

Finally, the story on school photos is really a story about the rapidity of cultural change. I love my old school photos and the photos of my kids. They really do tell the truth about how we changed as we grew up. . . visually at least. Sure, we didn’t like all of them and “re-takes” were many times scheduled. But there’s something real about those annual school pictures. USA Today tells us that there’s now a bias against that kind of “lowbrow” school photography shot by the guy set up in the gym. Now, people (the article says it’s mostly moms) are paying premium dollar (upwards of $700 to $1200) to hire the hip photographer who will capture their kids in ways that depict “coolness”. . . and there’s that word again. . . and there’s another look into our hearts again.

What’s important to us? What do we value? What drives us? The news in USA Today isn’t really that good, is it?