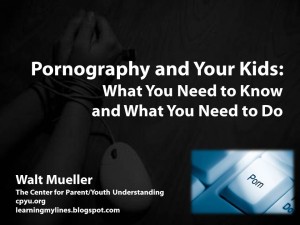 It seems like a day doesn’t go by without the news featuring some kind of story related to the dark side of the Internet and social media. This week, it’s the unfolding saga of government officials and socialites. That’s the big story. Thousands and thousands of “little” stories never make the news, but they sure make our lives miserable when they hit close to home.

One incredibly dark side of life in today’s tech-saturated world is pornography. We’ve been examining the issue here at CPYU with some intensity for the last few months. It is incredibly dark. . . perhaps more dark than any of us care to know or imagine.

As I’ve examined this pervasive and magnetic cultural force I’ve come to the conclusion that when it comes to kids and pornography, it’s a matter of when not if.  It’s not at all unreasonable to assume that your middle school or high school-aged teen has seen, sought out, or developed a dangerous and destructive relationship with pornography. That’s why one week ago today, we held a live webinar on “Pornography and Your Kids: What You Need to Know and What You Need to Do.” That’s why this weekend at the National Youthworkers Convention in Dallas I will be speaking on “Growing Up In a Porn Is The Norm World.” Again, this is one of those topics I wish we never had to talk about. . . but we do.

Let’s be realistic here. . . when it comes to what our kids are doing with pornography today, there will be long-lasting fall-out tomorrow. I talk about that in the webinar. Several people have asked me if I’ve got an opinion on what the future of pornography holds. In other words, if the world of pornography and what the world of pornography does to change the world is evident in what’s happened over the last 30 or so years, what can we expect to see 30 years from now. . . or less? Here are some thoughts:

1. We will see increased frequency and widespread exposure to pornography at younger and younger ages. That’s what’s called age compression. We know that pornography is already finding five and six-year-olds. That trend is only going to ramp up to the point where rare is the elementary-aged kid who hasn’t seen it.

2. Pornography’s envelope will stretched to the extremes. There’s a growing market for pornography. That  growing market is creating a need for more extreme types of pornography. We’re not talking here about naked women. We’re talking about even more horrifying and even criminal stuff that at it’s most extreme level, depicts and includes children.

3. Like a drug habit, desensitization occurs, creating a need for more frequent and higher doses. Pornography addiction will be off the charts.

4. As pornography moves into the mainstream, it will be increasingly accepted, tolerated, and even celebrated. The use of pornography will become a right – maybe even a virtue – that is nothing more or less than a matter of personal preference and taste. Gone will be our societal ability to label it as wrong.

5. There will be a normalization of depicted behaviors and practices. What one sees is what one will do. This is called social norming. Perhaps this is the most horrifying expectation imaginable.

Now is the time to understand, examine, and address the problem of pornography. We need to be prophetic, preventive and redemptive in our approach. I want to encourage every individual, every parent, every youthworker, and every church to take steps to deal with pornography. A good place to begin is with our webinar – “Pornography and Your Kids: What You Need to Know and What You Need to Do” – which is now available on DVD. You can order it here.