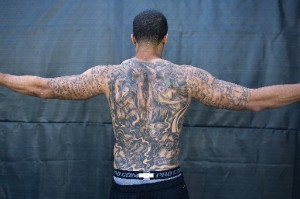 So sportswriter David Whitley of The Sporting News has spoken on 49er’s quarterback  Colin Kaepernick’s tattoos. . . and Whitley is highly critical. In fact, in his article on Kaepernick he calls the QB out for being inked up, likening him to an inmate at San Quentin. An article in today’s USA Today reports that Kaepernick’s adoptive parents are coming to his defense, saying that their son is an upright kid who does indeed have tattoos. . . of some personally meaningful Bible verses. . . covering his arms.

Should a Christian. . . or any human being for that matter. . . get tattoos? I’ve been asked that question countless times over the years. Usually the asker is quick to provide an answer. . . making it seem more like they’re quizzing me on my Bible knowledge or theology as opposed to seeking my opinion on the matter. Most of the askers don’t realize that the go-to Bible verse is Leviticus 19:28 where it says, “You shall not make any cuts on your body for the dead or tattoo yourselves.” Cut and dry, right? Not really. This isn’t a black and white issue.

Here are some initial thoughts and responses that came to mind as I read about the Kaepernick dilemma this morning. First, I don’t think the Bible forbids tattoos. The context here is a listing of Old Testament ceremonial laws, many of which had to do with keeping God’s people from participating in the pagan rituals and worship of the time. In particular, the context references a defiling of one’s self in some kind of ritual for the dead.

Third, we need to think about who or what we hope to glorify through the marks on our bodies. Do we endeavor to glory self? To glorify the things of the world, the flesh, and the devil? Or do we seek to glorify the Lord and Maker of the universe? When I read this article on the back-story on Kaepernick’s tattoos, I do think we should have serious concerns about his use – or misuse – of Scripture.

Fasten your seat belt here. . . I must confess that in recent years I have considered (never seriously, I might add) what I would tattoo on myself if I were to get a tattoo. I would want to permanently glorify the way God has moved in my life. It’s too personal to be specific about it. . . but rest assured that I also realize that a guy like me could never pull it off!

In our house we’ve had kids who have expressed interest in tattoos. Our policy has been this. . . “Until you are an adult supporting yourself, you can think as much as you want about a tattoo, but we don’t want you to get one.” Our concerns are really more about finances, adolescent impulsivity, and possible future regrets. In other words, save your money and give it great thought.

In the meantime, I’ve got my own sin to deal with. While reading Leviticus 19 this morning I was reminded of the fact that it is wrong to “wear a garment of cloth made of two kinds of material” (v. 19). I do prefer 100% cotton shirts. I see that that’s biblical. Still, I think I’ve got a few 90/10 blends in my closet. Oops.