A formal discussion about sexuality was had on the campus of Yale University back on Saturday, March 2nd. It was part of Yale’s “Sex Weekend.” The conversation took place during a workshop titled “Sex: Am I Normal?” Run by “sexologist” Jill McDevitt – who owns the Feminique sex store in West Chester, Pa. – the workshop included a time for students to anonymously answer questions using cell phones regarding their sexual practices. According to reports, survey responses indicated that 52% of the students had engaged in “consensual pain” during sex, 3% had engaged in bestiality, and 9% had paid for sex.

A report on the event from Campus Reform includes this: Event director Giuliana Berry ’14 told Campus Reform in an interview on Monday that the workshop was brought to campus to teach students not to automatically judge people who may have engaged in these sorts of activities, but rather to respond with “understanding” and “compassion.” “People do engage in some of these activities that we believe only for example perverts engage in,” she said. “What the goal is is to increase compassion for people who may engage in activities that are not what you would personally consider normal.” 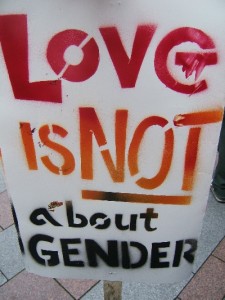 I’ve been mulling over this report from Campus Reform for the last two weeks. I got to really thinking about it again yesterday when I read this article in the online Christian Post: “Rob Bell Supports Same-Sex Marriage, Says He is for ‘Fidelity and Love.'” Of course, Rob Bell is no stranger to controversy. . . controversy that usually arises at about the same time he releases a new book. It seems that during an appearance at The Forum at Grace Cathedral in San Francisco he was asked if he was in favor of “marriage equality.” Bell stated that he is “for marriage. I am for fidelity. I am for love, whether it’s a man and woman, a woman and woman, a man and a man. I think the ship has sailed and I think that the church needs to to just. . . this is the world we are living in and we need to affirm people wherever they are.”

My great concern in all the discussion is that the starting point for many are emerging cultural norms (Rob Bell’s “the world we are living in”), the high court of public opinion (majority wins. . . or even more accurately, any minority option is valid and right), and an appeal to compassion. . . even Christ-like compassion. A vein that runs through all these starting points is the pursuit of personal happiness and fulfillment. . . without borders or boundaries. That’s what was at the root of Senator Rob Portman’s struggle to reconcile his Christian faith and conservative views with the homosexuality of his son, Will. Last Thursday, Portman publicly renounced his stand against same-sex marriage. On Friday, he penned these words in an op-ed piece in the Columbus Dispatch: “Ultimately, it came down to the Bible’s overarching themes of love and compassion and my belief that we are all children of God.”

The great dilemma in all of this that’s faced by people like me is this: “How can I best maintain faithfulness to God, Jesus Christ my Lord and Savior, and His revealed will in the Scriptures?” I oftentimes look to the story at the beginning of John 8 as the teachers of the law and the Pharisees stand a woman caught in adultery before Jesus. Jesus masterfully confronts the compassion-less sins of the Pharisees while simultaneously confronting the sin of the adulterous woman. Rather than saying to her “This is the world we are living in and I affirm your adultery” . . . or “love and compassion trump the wrongness of adultery,” he confronts her sin, forgives her, and implores her to “go now and leave your life of sin.” As I ponder how to best honor and remain faithful to the Lord, I’m brought face-to-face with how I view and confront sinners, while maintaining a clear understanding of the sins that I and all humanity so easily slip into and embrace. I don’t want to be or give people good reason to think that I am self-righteous. Rather, I want to humbly serve the Lord and others without compromising on truth. Sadly, the reality is that any equating of homosexual behavior and/or same-sex marriage with “sin” or “wrong” is seen as compassion-less and intolerant.

Not coincidentally (I believe), I’ve been reading through N.T. Wright’s After You Believe: Why Christian Character Matters. Wright states a compelling case for a more proper way to approach our lives as Christians here in the midst of our broken world. . . a way more proper than 1) the belief that Christianity is all about conformity to a set of rules (the Pharisees!), or 2) the more widespread contemporary error that Christianity is all about following a Jesus who “accepted people as they were, and urged them to discover their real identity, and to be true to that essence.” Wright goes on to say, “The idea of a goal, an ultimate aim, calling us to a hard road of self-denial – the idea, in other words, that Jesus of Nazareth meant what he said when he spoke of people taking up their cross to follow him! – has been quietly removed from the record, no only of secular Western life but also, extraordinarily, of a fair amount of Christian discourse.” I couldn’t help but reflect on these words from N.T. Wright as I read the reports on Rob Bell and Senator Portman.

It seems that in today’s rapidly emerging cultural climate, any effort to state any kind of opposition to same-sex sexual behavior/marriage based on Scripture leads to a default response that lumps one in with the Pharisees and position #1. It also seems that the accepted proper place for Christians to land is at position #2. But neither should be an option.

So what option should inform our thinking and acting on this and other issues? I think N.T. Wright nails it: “We urgently need to recapture the New Testament’s vision of a genuinely ‘good’ human life as a life of character formed by God’s promised future, as a life with that future-shaped character lived within the ongoing story of God’s people, and, with that, a freshly worked notion of virtue.”

God’s promised future is one of restoration. . . the restoration of the shalom lost at the fall. . . a re-ordering of things that are not the way they’re supposed to be (including in relation to our sexuality and broken sexual impulses. . . whether they be heterosexual, or homosexual, or whatever-sexual) to what they were intended to be. When we grasp that reality and look to God’s Word, we are all going to be confronted with deep discomfort over ourselves and our culture. Shouldn’t we all be for fidelity and love? Shouldn’t our first fidelity and love – even if costly – be to the revealed will of God and our Groom? I don’t say this arrogantly. . . Nor am I being nasty. . . I’m deeply concerned. . . .

And so I continue to think about that weekend at Yale. . . a university founded in 1701 by New England clergy “wherein youth may be instructed in the Arts and Sciences through the blessing of Almighty God may be fitted for Publick employment both in Church and Civil State.” The school’s motto? “Lux et Veritas” . . . “Light and Truth” . . . to this day.