The Bible in one hand and the newspaper in the other. That’s how theologian Karl Barth said Christians should begin their day. Theologian John Stott told us to engage in “Dual Listening”. . . the practice of listening to both the Word (Bible) and the world (newspaper) so that we can consciously and carefully bring the light of the former to bear on the darkness of the latter.

I didn’t get yesterday’s newspaper in my hand until last night. And when I did, I was reminded that opinion and experience outweigh truth in today’s culture. To appeal to the truth’s of God’s Word is laughable, archaic, and just plain stupid. Not only that, we are living in a church culture where it’s clear just how much the sequence of John Stott’s “Dual Listening” dictum has been increasingly reversed among the very people – Christians – who should be getting the order right. Culture and world is now understood to inform and trump the Word. And before you think that I’m pointing the finger first at others, I realize that this tendency can so easily sneak into my own life. Mark Galli’s brilliant piece in the latest Christianity Today on Rob Bell and the “evangelical religion of feeling” sheds some light on this reality, how it works, and what it’s done to the church. No doubt, this reality has played out all through the course of history in a variety of ways. It seems that the contemporary issue that reveals these tendencies more than any other might be the debates raging over homosexuality. We should be pausing to ask ourselves, Is the Word illuminating our view of the world? Or, is the world illuminating our view of the Word? 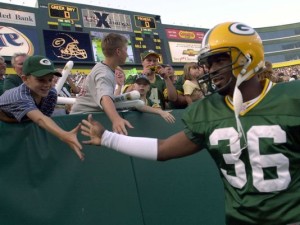 Last night’s reminder came in an op-ed piece by USA Today’s Christine Brennan that I found inside the sports section. The headline in the print edition caught my eye: “Church sends wrong message.” It’s important to read in its entirety since you need to evaluate my comments in the context of Brennan’s complete piece. Former Green Bay Packer LeRoy Butler (inventor of the “Lambeau Leap”) was dis-invited from speaking at a church in Wisconsin after he tweeted a congratulatory message about Jason Collins (“Congrats to Jason Collins”) after Collins came out. It seems that Butler’s tweet had crossed the line of a morals clause in his speaking contract with the church. Brennan states that the morals clause in question is in effect a pledge that Butler “won’t say anything nice about gay people.” Brennan goes on to write, “Say this for that congregation: It must make life so much easier when you don’t have to concern yourself with all that ‘Do unto others’ stuff. . . . We can guess what the parents of that church were trying to shield their children from: even the hint of a discussion of gay people in American life.”

Like so many other stories from the past few weeks, this one makes my head spin as I try to sort out all that’s happening behind the actions and words. Here are some thoughts. . .

First, I believe that we need to listen to and ponder the many critiques of Christians and the church that we are encountering these days. They can be very helpful to us as they open our eyes to how people perceive and experience us. Reality is, there are things that we need to change about the manner in which we present ourselves and engage with others. We look like ignorant idiots because we’ve been ignorant idiots. But as we encounter these critiques, we need to differentiate between critiques that challenge us, and those that challenge the Gospel. We’ve been told in the Gospel that the Gospel is offensive. But that does not mean that we need to be offensive in such a way (or any way for that matter) that people can’t ever get beyond our offensiveness to encounter the life-changing and life-giving offensiveness of the Gospel.

Second, we need to understand context. My main critique of Brennan’s piece is that she doesn’t include context, an omission that can so easily lead to misinformation and poor conclusions. Granted, I have no idea what transpired at the church after Butler sent out his tweet. As one who has served on a church staff and been responsible for bringing speakers in to speak to youth group kids I understand the responsibility and need to serve as a gate-keeper. Who knows how this decision was made, why it was made, and how difficult it may have been? Who knows what the church knew? It’s a dangerous jump to conclude from the reversal of the invitation that this is a church that doesn’t concern itself with all that “Do unto others” stuff, that they don’t say anything nice about gay people, or that the parents are about shielding their kids from a discussion of gay people in America. Take a lesson. . . as we enter into these extremely sensitive discussions we can’t be quick to jump to conclusions void of context.

Finally, we need to keep devouring the Word. If we aren’t careful to keep our bearings we are sure to lose our bearings. The Word should not only inform what we believe, but how we engage with those who might think and believe differently. We need to be people of deep conviction and we need to be willing to pay whatever price those convictions bring. But we can never be ignorant and graceless idiots.