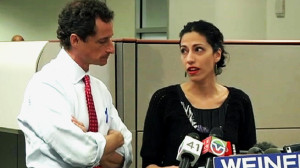 For the last several days, I’ve been mulling over the most recent chapter in the ongoing saga of New York City Mayoral candidate Anthony Weiner. No doubt, Weiner’s story offers a peek into just how fast our culture is changing. Consider the fact that his story has centered around “sexting,” a term and practice that wasn’t even on our cultural radar just a few years ago. . . an example of how we as broken human beings continue to take good things and use them in a destructive direction. In this case, it’s taking good things like marriage, love, sexuality, and technology and using them in ways that bring glory to the kingdoms of the world, the flesh, and the devil.

In many ways, times have changed but people have not. Fifty years ago, the White House was inhabited by a President and administration who were indulging many of the same things. We just didn’t know about it. There was a commonly-held notion that when these things happened, the media looked the other way and said nothing. One had to maintain the appearance of propriety. . . and we certainly didn’t want to poison and spoil the innocence of children by giving them the knowledge that not only did these things happen, but that they might even be OK.

Weiner’s story and the way it’s being communicated indicate that things have changed. Yes, broken humanity still populates the globe. People still take good things and use them in destructive ways. But as the line shifts, no matter how we choose to use those good things, we increasingly see any kind of use as “good.” Once-commonly-held borders and boundaries are disappearing.

I think that these realities and others are worth putting to the test by not looking the other way in the case of the Anthony Weiner story. It’s out there. And when we don’t make a deliberate effort to think critically and Christianly about Weiner’s story, the way it’s being reported, and the response of everyone from televised talking heads to bloggers to our own kids, we are only setting the table for increased acceptance and normalization of that which may shock us for a little while today. . . before becoming commonplace tomorrow.

I’ve embedded a couple of reports on Weiner from last Wednesday morning’s The Today Show. Take some time to give them a look with a discerning and critical eye. I especially think these videos are worth watching with your kids ( at home, in the classroom, in youth group, etc.) The first video reports on the story. The second offers commentary and response. There’s an especially telling moment a little less then two-and-a-half minutes in to the second video. Listen to what is being said about normalization and acceptance. Wow. Think critically and Christianly out-loud with your kids as you watch. Listen carefully to their responses as they will give you insight into what your kids are thinking/believing about these matters.

What do you see and hear as you watch? Based on this story and these news reports, what can we learn about ourselves and our culture? Who are we? What do we value? What do we believe? Is there right and wrong? What do we need to be teaching our kids?