You have to be living under a rock or media-free to not know that there’s trouble in Major League Baseball today. BIG trouble. To be more accurate, there’s trouble in sports at every level. . . just think about the stories from last week including those about Riley Cooper and racism, Johnny Manziel and a host of issues, or the parents of the 10-year-old baseball players who got into it with each other after a game last week. With incivility, cheating, and a lack of integrity weaving themselves in and through every nook and cranny of our culture, we might be getting perilously close to the day when stories like these don’t even make us flinch because we’re used to them. 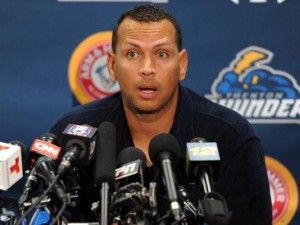 But today the big news is about baseball and the latest round in the doping and drug use scandals. Today has even been dubbed “PED-Day.” As of this moment, we’re still waiting to hear names and punishment details. What we do know is that the biggest name of all in this story – Alex Rodriguez – will be suspended until the 2015 season. Reading the history, accusations, and facts of this story will make your head spin. It’s long, involved, and confusing. A-Rod himself seems to be making an even bigger mess of things through the choices he has made and the choices he’s continuing to make as the story unfolds.

One thing is clear in all of this. . . we’re all over the place in terms of character and ethics.

Ben Walker’s AP column on the story offers some interesting insight into how baseball players are processing what’s happening in their world. Walker quotes Hall-of-Famer Joe Morgan and his opinion on whether or not the penalties doled out today serve as a deterrent as ball-players weigh the pros and cons of this kind of behavior. Morgan says, “It depends on what the punishments are. The thing with me is always the risk versus the reward. What is the reward? Getting a $150 million contract. What is the risk? A 30-day suspension, a 60-day suspension? The risk doesn’t outweigh the reward. Until that happens, it’s not going to change. It’s very simple: the risk has to outweigh the reward.”

What Morgan is saying is that the ends justify the means. Just doing the right thing no longer matters. It isn’t the option, but simply one of many options. Sadly, that’s how our kids are learning from their heroes about how to evaluate and make ethical decisions. But this methodology is sketchy, it’s narcissistic, it’s self-centered, it’s materialistic, it’s dangerous, and it’s flat-out wrong. And if this kind of thinking continues, then that last sentence will be hopelessly old-fashioned, irrelevant, judgmental. . . and, wrong.

Of course, the Scriptures should be our ultimate guide in all of this. And our kids need parents, grandparents, pastors, youth workers, and a village full of adults whose words and examples point directly to the truths of God’s Word on truth-telling, character, and morality. But beware: even hinting at that in today’s culture puts you into the camp of those who are hopelessly old-fashioned, irrelevant, judgmental. . . and wrong. I would suggest that while we ultimately appeal to God’s revealed will and way for His world, it doesn’t hurt to also teach our kids about the timeless standards of virtue and character that have served to advance societies throughout the course of human history.

The Josephson Institute of Ethics has been tracking attitudes and behaviors of young people for several years. They offer some helpful guidelines in their “Six Pillars of Character.” These Six Pillars of Character are “ethical values to guide our choices,” including trustworthiness, respect, responsibility, fairness, caring, and citizenship. Out of these values grow standards of conduct that constitute the ground-rules of ethics and of ethical decision-making. In other words, they help us to do what is right as opposed to what is right for me.

Consider these words from The Josephson Institute’s Making Ethical Decisions: The Six Pillars of Character:

“Honesty in conduct is playing by the rules, without stealing, cheating, fraud, subterfuge and other trickery. Cheating is a particularly foul form of dishonesty because one not only seeks to deceive but to take advantage of those who are not cheating. It’s a two-fer: a violation of both trust and fairness.”

“Life is full of choices. Being responsible means being in charge of our choices and, thus, our lives. It means being accountable for what we do and who we are. It also means recognizing that our actions matter and we are morally on the hook for the consequences. . . . Ethical people show responsibility by being accountable, pursuing excellence and exercising self-restraint.”

“Responsible people exercise self-control, restraining passions and appetites (such as lust, hatred, gluttony, greed and fear) for the sake of longer-term vision and better judgment. They delay gratification if necessary and never feel it’s necessary to ‘win at any cost.’ They realize they are as they choose to be, every day.”

When you look at A-Rod today. . . and you most likely will. . . think about him as mirror that fires back a pretty clear picture of our culture and our selves. Yes, shame on you A-Rod. But if A-Rod’s decisions and behavior don’t seem as appalling as they might once have seemed, then shame on us. . . and on me. . . as well.