Shortly after graduating from seminary in the mid-1980s, I jumped back into local church youth ministry with a renewed commitment to ministry effectiveness. At the time, I worked to build a volunteer youth ministry team that would reflect a 1 to 5 ratio. . . one volunteer who could endeavor to care for a small group of five students. We quickly reached that ratio with a wonderful group of volunteers, most of them under the age of thirty. . . and many of them in their early twenties. The number of volunteers and their average age was enviable. Thirty years ago, this was cutting-edge stuff in youth ministry.

Not so today. The world has changed. Along with that have come new cultural realities that have turned the volume up on systemic brokenness, making the relational needs of our students that much deeper and urgent.
My good friend Chap Clark was the first one to get me thinking about flip-flopping that once-enviable ratio of yesteryear. It’s been almost fifteen years since Chap first suggested to me that every kid needs five adults investing in their lives. I scratched my head for about two-seconds after hearing Chap’s new ratio. . . and then I quickly realized that it was a no-brainer. In a 2004 article in Decision Magazine, Chap went public, encouraging readers to embrace and pursue the 5 to 1 ratio for the sake of our kids spiritual growth. He wrote, “Here’s the bottom line: every kid needs five adult fans. Any young person who shows any interest in Christ needs a minimum of five people of various ages who will say, ‘I’m going to love that kid until they are fully walking as an adult member of this congregation.'” It makes complete sense. And since Chap first brought it up, it has – fortunately for our churches and our kids – been getting more and more attention and traction in our youth ministry world.
Now, I’m wondering if we should go beyond just thinking about 5 to 1, to thinking more deeply about who those five adults are and the kind of mentoring they provide. 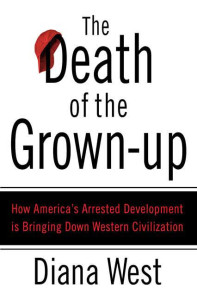 Last week, I began working through Diana West’s no-nonsense book on extended adolescence and our culture of youth here in the United States, The Death of the Grown-Up: How America’s Arrested Development is Bringing Down Western Civilization. As one who loves reading sociology, history, and social commentary, West’s book is one that I find compelling. So far, I can’t bring myself to argue with any of her arguments. West contends that since World War II and the rise of post-war marketing, consumerism, and the advent of adolescence as we now know it, we have become a culture that has shifted from a child’s duty to his parent (or to adults in general), to a culture centered on a parent’s (or adults in general) duty to his child. In addition, we adults have become consumed with looking like, thinking like, acting like, and feeling like we’re drinking out of the fountain of eternal youth. Thus, we now have extended adolescence that’s extending far beyond one’s twenties and thirties. West contends that adults are now abdicating their role to provide a social counterbalance to a younger generation that typically wants to break with the past and take charge.
If West is right, we’ve got our work cut out for us. Not only do we need to work hard to convince adults to take their place in the 5 to 1, but we’ve got to work hard to convince those adults to be adults in the first place. If we don’t, we might as well let the kids mentor each other.
This is a trend worth recognizing, watching, and addressing. The implications for our ministries run deep. We need to realize that effective ministry to kids requires the investment of Dads, Moms, and those other five-plus adults who reflect the full spectrum of adult-age. And the ministry effectiveness of those adult mentors increasingly depends on just how deep, wide, and mature (old, maybe?) in the faith those adults have been taken by those who are ministering to and nurturing them.