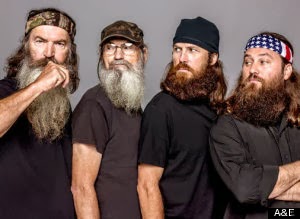 I’ve deliberately waited a couple of days to gather my thoughts and respond to all the craziness surrounding the suspension of Phil Robertson by A&E from his massively popular reality show, Duck Dynasty. To be honest, I’ve only read a few of the posts that are popping up all over the place in response to the news. And as much as I’d like to post a clear, concise, and direct response that sums it all up and puts it to bed, I can’t.

But I do have some random thoughts that are all over the place and horribly incomplete. . . . and most-likely not very well stated. . . here goes. . .

Finally, I’ve got a hunch. . . and a hope. . . that the Robertson’s will handle this all just fine. And, if they wind up without a reality show, that’s just fine as well. Life will go on for us all. There’s even a part of me that wonders if God might not be saving the Robertson’s from something by putting an end to it all.

So, let’s get our focus this weekend back on celebrating the coming of Christ into the world.