My intent is not to make anyone angry. Rather, I simply want to invite you into my head as I attempt to make some sense out of my very limited and very incomplete knowledge of what’s been happening in Ferguson, MO since August. I’m endeavoring to see Ferguson in the larger context of history. Perhaps most important in seeing Ferguson in the context of history is our need to embed the Ferguson story in the larger story. . . one that goes much further back than U.S. History. . . more specifically, God’s story. 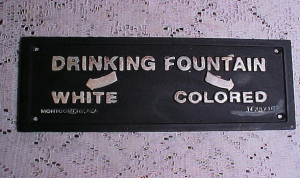 Sadly, I remember seeing this kind of thing in the south

I make no claims to having this all figured out. Rather, I’m treading slowly, carefully, and deliberately in an effort to gain understanding before jumping to conclusions on innocence, guilt, justice, and injustice. . . along with the proper measures of each.

Last night, I watched with deep concern as my TV spewed speculation, opinion, and news in the before, during, and after of the grand jury announcement. I also tracked with social media, knowing that a mix of knowledge, ignorance, wisdom, and foolishness would be flooding the online world. As I write this morning, it’s not at all surprising that the top three trends on Twitter are #Ferguson, Wilson, and #MichaelBrown.

And so as I think out loud, please know that I don’t have this thing all figured out. Not at all. It’s incredibly complex. At this point, here’s what’s running through my head. . . and to my youth worker friends, it’s my hope that these thoughts can contribute to your conversations with your kids. . .

Perhaps today we should all prayerfully bury ourselves in Genesis 1-3, the Gospels, and the last couple of chapters of Revelation. Perhaps we should all take a deep breath, reboot ourselves in the Scriptures, and then move our mouths, hands, and feet in the direction God would have them go.