The other day I posted a link to a great article by ESPN’s Tim Keown on the cultural insanity that we call youth sports. It’s a great piece titled “Where the ‘elite’ kids shouldn’t meet.”  While pondering Keown’s analysis, I thought back to something I had written way back in 1997. . . just about 18 years ago. I called it “Winners or Losers?” I thought I’d pull it out of mothballs and pass it on. . .

I learned some amazing lessons about life when I was a starting forward on the worst basketball team in the history of the world. We were a sloppy group of pre-pubescent sixth and seventh graders who took to the gym floor on Friday nights in the ugliest uniforms you’ve ever seen. With “St. Mark’s” emblazoned in road cone orange across the front of our jet black polyester jerseys, our hearty band of clumsy wannabes would begin warm-ups hoping “tonight’s the night we’ll win our first one.” We never allowed the fact that we had difficulty putting the ball through the hoop during the pre-game lay-up drill to shatter our dream. 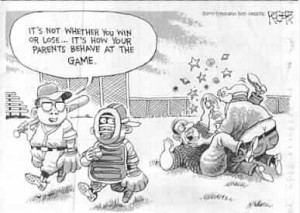 But the dream that refused to die never materialized as we showed up each week to play in a church youth league where every team but ours was manned by towering muscle-bound high school seniors and juniors. For two seasons, we never gained control of the ball on the opening tip-off. In fact, it seemed like we never had the ball. And when the final buzzer sounded, we never walked off with the scoreboard tilted in our favor. No team ever scored less than 100 points against us. Our scrappy team never scored more than 12 points in a game. In my entire two year basketball career, I poured in a whopping two points.

Do you know why I smile fondly as I remember that experience? Because it was fun. Our coach and parents never yelled. They always encouraged. They never made us feel like losers. If and when we scored, the entire place, would erupt with a cheer. Because of that, I can remember every detail of the one basket I made. I’ve forgotten my dozens of shots that missed. When the game was over, we always smiled. Playing for St. Mark’s taught me a lot about attitude, character, and the fact that basketball is only a game.

In the years since my days of basketball “glory”, I’ve had the opportunity to spend a chunk of time coaching teams and watching my own kids play organized sports. I’ve never taken my teams to a world championship nor are the odds great for my kids or any of their teammates to make a living playing games. Yet I wonder why the sidelines, stands, and team benches are peppered, sometimes covered, with parents and coaches who pressure and push their kids with a “succeed at all costs” attitude. These parents and coaches bully kids right out of childhood into the overwhelming frustration of a burned out “I have failed” existence. I must admit, there are times when I’m tempted to go with the flow of these attitudes. Have you ever felt the need to push a little bit harder so your kid’s not left in the dust?

Vincent Fortanasce is a psychiatrist, coach and member of the Little League Hall of Fame. In his book, Life Lessons from Little League (Doubleday), he relates how he asked parent’s at the initial team meeting about what they first ask their children after a game, if they had not been able to attend. The most common question was “Did you win today?” The second most frequent question was “How did you do?” Fortanasce writes, “What was my point? Simply that I wanted my team parents to re-focus away from ‘I want my child to learn to win,’ or the pursuit of perfection, to the pursuit of contentment and confidence; from ‘I want my child to be the best player on the best team’ – the pursuit of talent – to ‘I want my child to be a good sportsman’ – the pursuit of character.” He suggests that the more appropriate questions are “Did you have fun?” or “What did you learn today?”

Plato said, “You can learn more about a person in an hour of play than you can in a lifetime of conversation.” A twist on Plato’s words ring true today: we can learn quite a bit about a parent in a few minutes of observing them watch their own child play. What do you see when you look in the mirror? As you evaluate the role you play in the lives of the kids you parent and/or coach, consider these questions:

Who’s out on the field? Unfortunately, some parents see their kids as a second chance to fulfill dreams they themselves never realized. Best selling recording artist Alanis Morrisette’s gripping song Perfect echoes the experience of too many kids: “I’ll live through you, I’ll make you what I never was/If you’re the best, then maybe so am I. . . you’ll make up for what I blew/what’s the problem. . . why are you crying?”

What’s on your mind? Mark understood when his talented 17-year-old son Travis asked to quit playing ice hockey. The win-at-all costs mind set of his coaches and teammates’ parents had finally gotten to be too much for Travis. Mark says that in youth sports today “the child’s welfare is becoming less and less important. The focus should be on instruction and developing character. But you wonder about some of the coaches and parents today . . . the bottom-line is that I never saw Travis smile when he played. . . I supported his decision 100 percent.” As a result of their decision, Travis Howe won’t be the third generation of the Gordie Howe family to play in the uniform of the National Hockey League’s Detroit Red Wings. For the Howe’s, character won out over winning.

What’s in your heart? Are the desires of your heart to see your child do his/her best. Or, is your heart set on a standard or level of achievement that is impossible for your child to attain. When sports psychologist Rick Wolff worked for the Cleveland Indians, he was surprised to discover that there were a large number of major league ball players who didn’t allow their kids to get involved in Little League baseball. The reason: the pressure on kids to excel beyond their ability and potential. Instead, they encouraged their kids to skateboard, ski, or anything else to keep them from the unnecessary pressure placed on youth league baseball players. After all, it’s only a game . . . and they’re only kids! Let them play and have fun!

What’s coming out of your mouth? “Frustrated parents . . . can attack the umpires, berate the managers and coaches, and demean the players on the field with impunity”, writes Fortanasce. “Some go the full hundred yards in criticizing their children’s teammates – and even their own children.” I’ve watched young kids cower and teenagers become bitter in response. And even if they do respond with improved performance, are those critical attitudes qualities that we want to nurture in our kids? Children learn from example. If we’re going to scream anything, it should be words of praise, encouragement, and acceptance.

In this day and age of increased activity, it’s realistic to assume that most kids will spend some time during their childhood in a uniform participating in some kind of organized sport. Hopefully, you and I will be on the sideline cheering them on. It would be a good idea for all of us sports parents to pinch ourselves and come back to reality. We’d realize that there’s a greater chance of getting hit by lightning than of our child growing up to sport a world series ring, wear the Olympic gold, or skate around holding the Stanley Cup.

Our children will grow up with memories of their childhood sporting experience. Those memories will be either positive, or negative.

I look back on my role as a player on the world’s worst basketball team with a smile on my face. Why? Because it was awesome. When the dust settled, I know that I came away from that “losing” experience as a real winner. Nobody screamed . . . nobody pushed . . . nobody lived their dreams through me. I hope my kids will be able to someday look back and do the same. How about you?