I read these words in 2 Peter 3:8 last weekend: “With the Lord one day is as a thousand years, and a thousand years as one day.” They came to mind this morning as I thought about July 13, 1985 and how that day seems like just yesterday. Time does indeed fly. 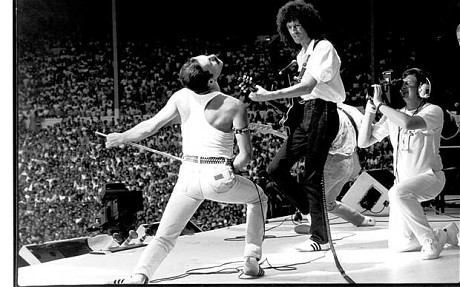 That day thirty years ago was a pretty full day for us. Our little family of three was spending our last full day of life on the North Shore of Massachusetts. Seminary was finished for me so we were with some of our closest friends, loading a truck in Salem, Massachusetts and getting ready to head to Philly for a fresh start in youth ministry at a local church. After loading the truck, we all went together to see Back to the Future. All during the day, we loaded up while keeping the TV and radio tuned to the Live Aid concert. As a music fan it was amazing.

For those of you too young to remember, Live Aid was a dual-venue one-day concert event held simultaneously in London’s Wembley Stadium and Philly’s now-demolished JFK stadium (I watched some Army-Navy games there as a kid). Both stadiums were packed to see the non-stop line-up of more than 50 rock acts assembled for the humanitarian event put together by Bob Geldof as a fund-raiser for Ethiopian famine relief. Almost 2 billion people in 150 countries tuned in on television. It was big. Over $300 million was raised as a result of the Live Aid event.

As I was thinking back to Live Aid and the music industry of the day, I got to thinking about how the event actually marks a half-way point between the beginning of Rock ‘n Roll as we know it, and today’s world of popular music. Elvis ushered in the era of Rock ‘n Roll with his first national TV appearance in January of 1956. . . roughly thirty years before Live Aid. Thirty years after Elvis, a rich and diverse mix of talent and creativity appeared in Wembley and JFK. Sure, there was a good amount of commercialism and $300 million raised from an audience of almost 2 billion is not exactly an indicator of a generation bent on generosity. But the 80’s were indeed a rich time for popular music. MTV was getting ready to celebrate its fourth birthday and it had resurrected a pop music industry that was markedly diminished and maybe even dying by the late 70’s.

At CPYU, we’ve always believed and taught that popular music is both a map and a mirror. As a map, it tells listeners (especially the young and vulnerable listeners who are in the process of forming identity and worldview) what to believe and how to live. As a mirror, it exposes the spirit of times. . . or, what we believe and how we are choosing to live. For the follower of Jesus, the popular music of the 80’s was troubling in many ways. But it was music that for the most part came from the heart of the artist. It was creative, thoughtful, and often-times deep.

Today’s music is still a map and a mirror,  but it is less and less driven by the creative heart and convictions of the artist, and increasingly driven by commercialism and marketability. Sadly, it is shallow consumerism that is trumping depth, thoughtfulness, and creativity. As a result, commercialism is shaping both the music and the audience. This is tragic. It’s also an indicator of who and what we’ve become.

So, for one day, I’m passing on a handful of Live Aid moments that reflect the music of the time. Enjoy. . .