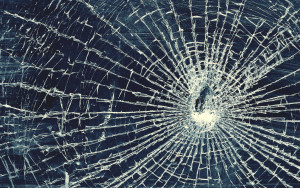 “Everything is broken” sang Bob Dylan back in 1989. Has there ever been a song title that tells the honest-to-goodness truth in a more direct way than that? I don’t know. What I do know is that the older I get, the less shocked, surprised, or stunned I am by stories like those we’ve been hearing and reading in this week’s news. Because if, indeed, everything is broken, then we shouldn’t be shocked, surprised, or stunned by stories of broken people falling prey to their brokenness.

Age has also done a number on my response to stories of downfall and exposure in the lives of people like Josh Duggar and Jared Fogle. In the past, a streak of nasty self-righteousness would result in one of my hands pointing a condemning finger, while the other would pick up a stone. To be honest, that’s still an issue for me. But time, perspective, the Scriptures, and a growing awareness of the fact that Jesus told the Pharisees and me to “go ahead and throw that stone if. . . ”  – well, there’s been a much-needed shift taking place.

Of course, Josh Duggar and Jared Fogle have been caught in the act of doing some horrible, immoral, and flat-out sinful things. For choosing to walk those paths they are clearly responsible and accountable. But their actions should also have fall-out in our lives too. . . serving us as clear reminders and deterrents. For the reality is that we, like them, are broken human beings. And lest we think that we are above, beyond, or immune to doing the same. . . well. . . that would be a grave error in judgement. The well-worn cliche. . . “there but for the grace of God go I” . . . is more than appropriate here.

So for me, this week’s news is one more reminder of my need to consistently engage in three very important tasks. . .

First, I must earnestly seek to know and follow God’s will and way when it comes to my sexuality. Truth is, sexuality is a spiritual battle-ground for all of us. Our wonderful, God-given desires took a turn for the worse when our first parents rebelled (Genesis 3:6), and sexual Shalom/flourishing has been compromised ever since. Consequently, we must search the Scriptures to not only learn what it means to flourish sexually (Genesis 1 and 2 frame sexuality as a God-given gift we are to indulge in the context of a one-man and one-woman, lifelong, monogamous, covenantal marriage), but to see how those who have lived before us have chosen to compromise their sexuality along with the personal and corporate fallout that rippled out from their sin.

Second, I must consistently stand in the mirror and engage in the process of sexual self-examination, looking for those points of personal weakness that leave me most vulnerable to compromise and failure. I am consistently reminded of the letter Gordon MacDonald wrote to the church after Ted Haggard’s high profile failure back in 2006. MacDonald, writing from his own painful experience, reminded us that there is an assassin living in us all. It waits to take us out. Consequently, we need to know, recognize, and avoid that assassin like the plague. I’ve learned that if you don’t think there’s an assassin living in your life, then the assassin already has you in the cross-hairs of a loaded rifle.

Third, I need to look with discernment out of the window of my life into a culture that is doing everything possible to get me to indulge my sexual brokenness. I need to spot the lies, call them lies, and turn from the lies by letting the Gospel speak the truth into the depths of my soul. How easy it would be to believe the pervasive and compelling Ashley Madison tagline lie that’s actually become a directive for so many people: “Life is short. Have an affair.” The culture has laid before us a sexual smorgasbord that can be indulged, we are told, without borders or boundaries. The menu invites us to indulge our sexuality based on personal preference whenever, wherever, however, by whatever, and with whomever. And in the wake of indulged brokenness you will never find the healing and wholeness that’s promised. . . you’ll only find more hurt, harm, and brokenness. We need to look at the table the culture has set before us, recognize that it’s not at all healthy, and run away.

So today, guys like Josh Duggar and Jared Fogle shouldn’t become objects of our mockery. Instead, they should serve to literally scare the hell out of us. They are and will suffer the consequences of their choices. Their choices should also have consequences in our lives by shaping our never-ending sprints to the Gospel, by forcing us to look endlessly at ourselves so that our guard will always be up, by spurring us on to recognize and turn from the lies, and by leading us to a resolve to always tell the truth to ourselves and others.