The college football season began in earnest over the weekend. This week, the pros hit the field. High school football players played their first game here in Pennsylvania last Friday night. But the football story that’s getting the most attention is one out of San Antonio, Texas, where two John Jay High School defensive backs apparently tackled and then speared the Back Judge in retaliation for what they thought, reportedly, was an unfair call. 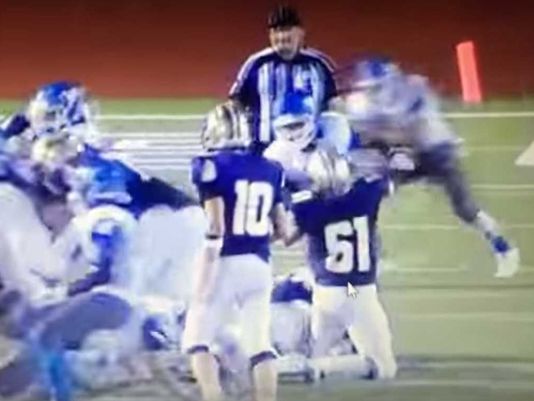 The video (below), which has been played on a loop since the story broke, appears to offer solid evidence that the official was deliberately targeted. News outlets are reporting this morning that the school, law enforcement, and others are investigating to get the full story. Did they do this on their own? Were they instructed to do by their coaches? There are lots of questions that need to and will be answered, I’m sure. In the meantime, the players have been suspended, and rightly so.

While we wait to hear more of the details, this high-profile story and the now-viral video remind us of realities that are becoming entrenched in the fabric of culture. . . realities that clearly show us who we are, what we value, what we believe, and where we’re headed. Things have to had happened prior to this football moment that made this football moment possible. And even though scores of athletes, coaches, officials, and commentators are chiming in on the “never seen anything like it!” chorus, the tree that bore this ugly and violent fruit has been growing for quite some time. In fact, it was only a matter of time.

As I watched the video a second time, my first thought went to Thomas Lickona and his 1992 book, Educating for Character: How Our Schools Can Teach Respect and Responsibility. Released twenty-two years ago, the book was written in response to unfolding cultural realities that had sparked the character-education movement in our schools. Character, responsibility, respect, and civility were on the decline. Lickona had put together a strategy for schools to, sadly, fill the void left by other institutions that were failing to develop and instill character in kids. What I remember most about Lickona’s work was that it was descriptive, predictive, and prescriptive. The first words of Chapter One are a quote from Teddy Roosevelt: “To educate a person in mind and not in morals is to educate a menace to society.” Lickona wrote that if things were to continue as they were in terms of morals and character formation, our culture would face a dim future as we moved into the 21st century. At the time, Lickona listed these ten indicators that we are failing as a society to provide for the moral development of the young:

In a few short years, we’ve seen compromises in coaches as they teach their players to bend the rules in order to gain an advantage. We’ve seen players increasingly posture and taunt. We’ve seen a decline in civility among fans who sit in the stands of billion-dollar worship facilities, bowing down at the altar of a “win-at-all-costs” mentality which has resulted in horrible displays of sportsmanship. And, we’ve seen a marked decline in the sideline behavior of parents who scream and yell so hard at everyone on the field (including their own kids), that games are no longer played for fun and enjoyment, but endured. We could go on and on.

The John Jay High School story will be front-and-center for a little while at least. As it unfolds, use it as a talking point with the kids you know and love as it can facilitate a teachable moment about what it means to play, cheer, coach, and spectate to the Glory of God. Sport and play are good things given to us by God. What we need is to flourish on the field and in the stands. Yes, it is possible to be people of Godly character who exemplify the fruit of the Spirit – love, joy, peace, forbearance, kindness, goodness, faithfulness, and self-control – when you are playing, cheering, coaching, and spectating to the glory of God.