Last night I saw this post from a Facebook friend: “As a woman conceived in rape and incest, I am so very grateful that my 14 year old birthmother didn’t join the voices of ‪#‎ShoutYourAbortion‬. My life has been incredible and 6 children and 15 grandchildren later, I am thankful for this dear woman every single day!!!”

Wow. Not only was that post moving and thought-provoking, but it sent me on a quest to learn more about the alarming hashtag launched last Friday that started receiving publicity in a big way yesterday. #shoutyourabortion was a Twitter hashtag launched by three female activists who are disturbed by conservative efforts in Congress to defund Planned Parenthood. The women are calling for women who have had abortions to proudly share their stories and thus remove any remaining stigma attached to having an abortion. One of three posted this on Facebook as they began their efforts to send the #shoutyourabortion hashtag viral: 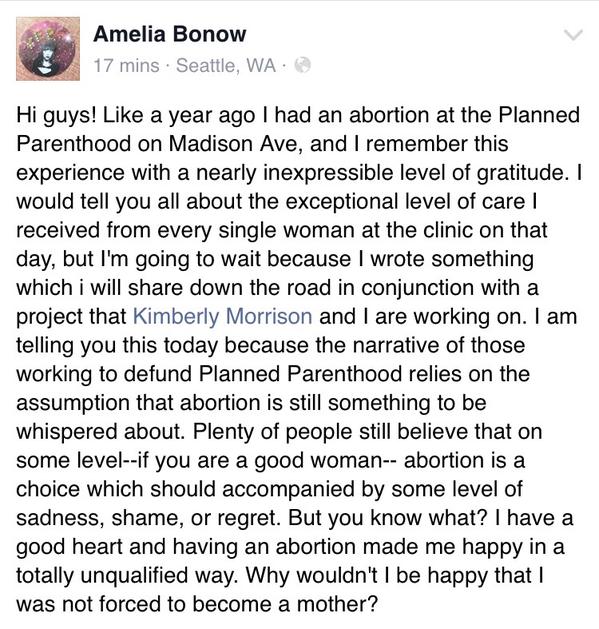 And this tweet from another of the activist organizers. . .

One of my heroes of the faith, Francis Schaeffer, pushed back hard on the abortion movement and the worldview from which it came and which it promotes back when Roe v. Wade became the law of the land. An astute cultural critic who knew that ideas matter, Schaeffer wrote these words that I’m contemplating today. . .

“Certainly every Christian ought to be praying and working to nullify the abominable abortion law. But as we work and pray, we should have in mind not only this important issue as though it stood alone. Rather, we should be struggling and praying that this whole other total entity ‘(this godless) worldview’ can be rolled back with all its results across all of life.”

“But the dignity of human life is unbreakably linked to the existence of the personal-infinite God. It is because there is a personal-infinite God who has made men and women in His own image that they have a unique dignity of life as human beings. Human life then is filled with dignity, and the state and humanistically oriented law have no right and no authority to take human life arbitrarily in the way it is being taken.”

“If man is not made in the image of God, nothing then stands in the way of inhumanity. There is no good reason why mankind should be perceived as special. Human life is cheapened. We can see this in many of the major issues being debated in our society today: abortion, infanticide, euthanasia, the increase of child abuse and violence of all kinds, pornography … , the routine torture of political prisoners in many parts of the world, the crime explosion, and the random violence which surrounds us.”

With the proud trumpeting of the hashtag #shoutyourabortion this week, we have moved one steep deeper into the hole of narcissistic cultural decline that we as human beings continue to dig for ourselves. The great and tragic irony in all of this is that our efforts to secure what we believe is human freedom results in humanity killing itself. . . whether the victims are the unborn, the poor, the refugee, the trafficked, or those who look different than ourselves. Lord, save us from ourselves.

Perhaps we need to #shouttheimagodei with courage and conviction. And our shouting needs to be seen and heard.