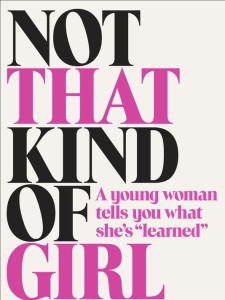 I have not read Lena Dunham’s best-selling recent memoir, Not That Kind of Girl: A Young Woman Tells You What She’s Learned. In all fairness to Dunham, perhaps I should. It’s not, however, even close to the top of my priority list. But even though I haven’t read the book that’s both a map for young woman trying to figure out what to believe and how to behave. . . along with a mirror of how young women in today’s culture increasingly do believe and behave. . . I am seeing widespread evidence of the effects of what Baylor University’s Elizabeth Corey calls “the contemporary literature of self-exposure.” And, it’s no respecter or gender or age.

Youth workers, parents, pastors and anyone else who cares about kids should pay heed to Corey’s astute and very accurate analysis regarding how what many believe to be a seemingly innocent book speaks to and for a growing number of people. Chances are, the worldview and lifestyle philosophy reflected and taught in Not That Kind of Girl works itself out in your life and my life without us even knowing it. Perhaps you and I are, in fact, “that kind” of person.

In her fascinating article (“Our Need for Privacy”) on self-exposure in the August/September issue of First Things magazine, Corey says that Dunhan “uses offbeat allusions and casual obscenity to ridicule convention and tradition while establishing its author as a quirky anti-hero . . . What Dunham has to say is that modesty, manners, and reserve are vestiges of a closed-minded sexist past. She therefore eschews privacy in favor of revealing more or less everything about the details of her personal life. . . ” Of course, this includes everything from her sexual encounters to her body image struggles and more.  In effect, Dunham is offering up and modeling “a certain kind of self-disclosure – call it the ironic confession – in which graphic ‘over-sharing’ violates the standards of decency that once enabled us to speak seriously about the possibility of someone’s being ‘horrible.'”

And so, we increasingly find ourselves living, breathing, believing, and behaving in a world without borders and boundaries. When others live it out on social media, we are tempted to keep up by doing the same. And as Corey says of this type of literary self-disclosure, “we have an obligation to understand it, both its ethical aims, such as they are, and the methods it employs. Voices like Dunham’s define the sensibilities of millions of educated people between the ages of about eighteen and forty. Many, especially young women, look to these authors as models. What are they learning?”

I don’t know about you, but I find this both frightening and challenging. It’s frightening because it is what currently is. It’s challenging because those of us who desire to obediently live counter-culturally in the footsteps of Jesus need to learn how to minister to both ourselves and others in ways shape hearts that yield lifestyles as they should be.

Corey offers additional insight that I’ve seen lived out in our world of youth ministry. . . both among our young subjects and those of us who are practitioners. She writes, “Here is where the real danger of the book lies. Using irony to celebrate a way of living in which nothing seems serious and everything is exposed, Dunham normalizes and even glorifies behavior that used to be straightforwardly wrong and harmful. The narrative never explicitly mentions morality or ‘values.’ Everything is light-hearted and endearlingly absurd. But the core message is simple and paradoxically unironic, to the point of being demandingly direct: This is the way things are now. Get over it. . . . Taboos exist to be broken.”

Are you seeing this type of belief and behavior in the kids you know and love? More importantly, do you see it in yourself? Take a look at your social media postings. Do you see it there? After all, we are all open books being “read” by vulnerable kids who look to us for guidance and direction. Tragically, I’ve noticed a small but growing number of youth ministry peers who are living these shameless ironies out on social media. . . and that is very frightening. We are never to default to “that’s just the way things are” as justification for our own reckless behavior. Rather, our desire should be to live every moment and breath in pursuit of the shalom that is the way “things are supposed to be.”

Last night I encountered this related directive in a Christianity Today editorial from Mark Galli: “Consensus, as important as it is at times, cannot be the final rule of faith and practice. The Bible is. It is crucial, despite a consensus to the contrary, that we remain faithful to what we believe God has revealed in his Word.”

I love this recommendation from Corey: “We need to find out what is being sold to the young people we care about. And we need to speak about the poverty of what today’s culture sells as being rich with meaning and importance. . . . And how unpromising is the way of self-exposure. Making things public tempts us to play to our publics.”

This is good stuff. . . and it matters much more than you or I even imagine.