So maybe “kill” is too strong a word. It might be better to use words like “derail,” “suck the life out of,” or “horribly misdirect” when it comes to social media’s growing effect on our kids. Never would I say that technology and social media are bad things in and of themselves. It’s how we use them that either leads to them being productive or destructive in terms of how the either foster or thwart human flourishing. 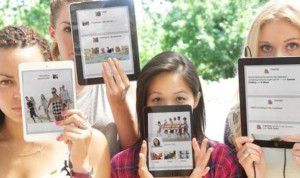 But the “kill” word came to mind over the weekend I’ve begun reading and considering Nancy Jo Sales’ new book, American Girls: Social Media and the Secret Lives of Teenagers. Sales embarked on a journey into the world of 13 to 19 year-old girls in an effort to seeds what it means for our girls to be on social media “all the time” (as they themselves report), what they’re doing there, and how it’s shaping. . . or perhaps mis-shaping – their vulnerable young lives.

It was Marshall Mcluhan who insightfully said, “We become what we behold. We shape our tools and then our tools shape us.” Sales offers some compelling and frightening proof of that fact. I listened to her short NPR interview last week. . . and so should you (see below). You should also read her book. Since girls “live” on social media, it maps out how they should live their lives, what they should believe, where they should spend their time, and how they should (sadly) curate themselves and conform their identities to cultural standards and expectations. Fulfilling the pornography-defined and shaped expectations of their male peers becomes a 24/7 pursuit. Sales writes, “‘Beautiful,’ ‘gorgeous,’ ‘sexy,’ ‘hot’ are conventional responses to selfies in a culture of social media, responses many girls seek as they spend minutes or hours of their day preparing themselves to the best advantage. . . . For many girls, the pressure to be considered ‘hot’ is felt on a nearly continual basis online.”

The consequences are only beginning to be felt. Beauty is only skin-deep, and the development of inward character qualities are decreasingly even an after-thought. Boys expect and girls submit to a kind of sexual self-trafficking that can be done begrudgingly or willingly. . . which in both cases is horrifying.

I was reminded of a poem I encountered about a year ago. Entitled “Our Generation,” the poem captures the pressure and results of these realities from the perspective of the two teenaged authors who penned the poem. At its end, the poem offers a few thoughts about us older people. . . parents in particular. It’s powerful.

I want to encourage you to give it a read. Then use it. How? Use it to open your eyes to what kids are facing in today’s world. Youth workers and parents should show it to the kids they know and love. Have them read it. Ask them if it speaks for them and their peers. If so, how does it speak? Use it as a diagnostic tool that can help you reboot your parenting or ministry efforts in ways that speak to the realities that exist in the world of your kids. Use it to discuss God’s story. . . Creation, Fall, Redemption, Restoration. . . and how they can find their place in it.

Our Generation- By Zoe Tempesta and Lorna Stephenson

Our generation is so obsessed with the idea of perfection
Society has consumed us with the thought of how we are meant to be
At first it was skinny
Now it is thick
What’s next?
We are influenced by terms that are not even real words
Such as
Baddie
Thot
Swag
Icy
We look up to celebrities who are addicted to fame, drugs and money
They taught us quotes such as “Yolo” and “Turn down for what”
Lyrics have become angrier, raunchier, and discriminating
Is this really role model criteria?
All I see in high school is a bunch of people who hate each other pretending to be friends
It is no longer a place to learn
Instead it’s all about
Passing
Failing
Appearances
And who you surround yourself with
High school is hell
A girl cries
People laugh
She thought she could trust him
Now the whole school has seen her naked
A guy lets a girl know how beautiful she is to him
Screenshots
Tweets
100 Favorites
All because he sounded “Thirsty”
People aren’t even dating anymore
You only find “Things” “Hook ups” and “Friends with benefits”
We meet on twitter by “Sliding into dm’s”
Which leads to talking
Catching feelings
Sleeping together
And ending as strangers
This generation has lost the meaning of romance
We toss around “‘I love you’s” like they’re “‘Hello’s”
We give our bodies to people who don’t care
And we are judged by the amount of people we have let in
Our generation relies on alcohol, drugs, and parties
We drink to get drunk
Drunk texts
Drunk hook ups
Drunk driving
Drunk decisions
Drugs are easy to find
When stressed
When happy
When lonely
When bored
Parties are no longer about celebrations
It’s for
Beer pong
Shots
Smoking
Sex
Our generation tried to grow up too fast
People of this generation do not talk
Only exchange links
We are masked by computer and phone screens
Confrontation has turned into
140 characters
Text
Status
And if we are lucky, a phone call
Doorbells are not rung
Instead a “Here” text is sent
Rather than being ignored physically
It is now just a “Read” text
Yet, it still hurts just the same
Because getting no message is also a message
Technology has ruined adventuring
We do not go out in the rain because our iPhones will be ruined
We do not camp because service is unavailable
We do not venture beyond places without outlets
Too many adolescents have addictions to superficial things
iPads, iPhones, tablets have substituted outdoor activities for Apps you can download freely
Parents complain all the time about this messed up generation
About how we are the wasted youth
But let’s not let them forget
They raised us
Times have changed
Parents have no idea what it’s like to be a teenager in this generation
We are constantly compared
Surrounded by peer pressure
And mislead by people who we thought cared
And even through all the bad, our generation still has hope