“List the five most memorable pop culture icons from your childhood.” Nobody ever gave me that task. But if they did, putting together my list would take little or no thought. As a kid who went through elementary and junior high school during the 1960s, my list comes together easily. Here they are. . . in no special order. . .

I include as one entity the three figures whose assassinations left a deep impression on my memory. . . JFK, MLK, RFK.

Then there was Mickey Mantle. I wasn’t a Yankees fan, but I loved baseball. And what baseball player ever had a better baseball name than #7?

You’d be hard pressed to find anyone of my vintage who would leave the Beatles off their list. The Fab Four were iconic. They changed the face of music and swept up youth culture in ways that have never been duplicated.

Next there would be television’s trend-setting (yes, at the time!) Batman, played by Adam West. That show brought comic books to life with bright colors, “BAMs,” and “POWs.”

Finally, perhaps nobody was more well-known than boxing’s Cassius Clay. . . another iconic sports name that grabbed us as kids. Even bigger was his mouth and the personality behind it. His manners and ego were opposed to what we learned at home, but you just couldn’t look away. His transition from Clay to Muhammad Ali was a curious thing for us to process as kids. It also added to the magnetism.

Since Ali died a couple of days ago, most of what I’ve watched and seen related to his death are the tributes/postings on social media. What I’ve seen and read has functioned as a kind of trip down memory lane as I’ve endeavored to reach back to those days in the 1960s when my very young self was watching and processing the man who was then known as Cassius Clay. 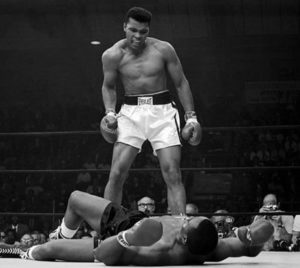 My present-day self ,who now sees and understands popular culture as both a map and a mirror, wonders just how much influence Ali had on us as a directive force shaping our beliefs and behaviors. His claims of “I AM THE GREATEST” seemed mostly serious at the time. In hindsight, there’s a kind of playfulness behind it all that certainly came out more clearly in his later years as he continued to graciously interact with people while battling the debilitating effects of Parkinson’s Disease. Watching his physical demise has served people of my age as a powerful reminder of the theological reality of aging and the fragility of life. Even the strongest among us are weak. But it was the playfulness of his post-boxing years that helps us understand the carefully curated role he was playing as a kind of pre-cursor to today’s WWE characters. Of course, Ali was at times “the greatest” in his sport, but the 60s were a time when parents and culture-at-large would discourage those of us who were younger from such displays of egotism and narcissism.

As a boy, I remember two things about Ali that were incredibly hard to process for someone my age at that time in cultural history. First, there was the name change when Cassius Clay became involved with The Nation of Islam. Now Muhammad Ali, I was confused by his assimilation into a radical group already associated with Malcolm X at a time when race issues were coming to the forefront of the American experience. I remember trying to sort it all out in my young mind. . . a task that I couldn’t complete. I just knew that there was controversy. Soon after, Ali was portrayed as almost criminal thanks to his unwillingness to join the military as the war in Vietnam was escalating and the country was becoming further divided over the conflict. All that to say, I saw Ali as a kind of anti-establishment rebel which seemed to me like something bad rather than something good.

Eventually, the 1970s arrived and the famous boxing matches between Ali and likes of George Foreman and Joe Frazier took center stage in the culture. Anyone who didn’t live through and experience those days has absolutely no idea how galvanizing those matches were. In hindsight, they were relatively bigger than today’s Super Bowls in attraction, attention, and scope.

Today, I wonder if there will ever be another time and place where people can conjure up similar lists of pop culture icons whose popularity, appeal, and influence is as widespread and even enduring. Culture sure has changed. This morning, I took some time on YouTube rekindling memories of those famous Ali interviews with Howard Cosell (embedded below). Could there be two more comedic characters coming together to chatter in ways that are not only hilarious, but fodder for impressionists everywhere. If only Saturday Night Live had been around back then!

And that leads me to this. . . some thoughts on Ali that could serve as talking points for those working with kids in today’s world. It seems that the social media response I’ve seen has leaned heavily on the side of the “good man” tributes. No doubt, Ali was engaging, charismatic, incredibly positive in adversity, generous, and kind. If that’s what makes a “good man”, then Ali was one. But when I watched Ed Bradley’s endearing 60 Minutes piece on Ali last night, there was one thing that kept me thinking as I went to bed. If you watch the interview (embedded below), you hear Ali’s fourth wife, Lonnie, describe his motivation for good works and kindness as deposits towards earning the reward of heaven. How sad. The Gospel is a Gospel of grace, not works. To keep the commandments and obey God is not the ticket to salvation. Rather, obedience is an expression of gratitude for God’s grace and completed work of salvation in our lives. It is the work of Christ, not self, that has secured our eternal life. No doubt, this will make for some great yet difficult conversations in a world that wants to promote works righteousness and universalism, rather than a Gospel of grace that understands Jesus Christ as the only way to the Father.