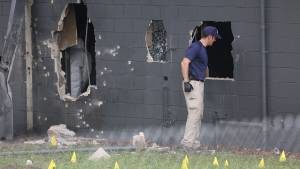 I wasn’t in Orlando over the weekend. Most people weren’t. Those who were are now engaged in wading through the physical, emotional, and spiritual mess of facing another in our long and growing line of “ground zeros.” To be sure, this won’t be the last. And, to be honest, outside of knowing a few facts, I’m not really sure about the whys and whats of Saturday night’s massacre at the Pulse Nightclub. Here’s what I think I can be reasonably certain about at this point. . .

Less than twenty-four-hours have passed since I first heard the news about what happened at the Pulse Nightclub. With each minute that’s passed, my head spins a little bit more. . . especially as I read the growing mountain of social media blabber. . . most of it occasioned by the ongoing news media (mediated) blabber coming from news outlets spanning the political and ideological spectrum.

Tracking with this reminds me of what I saw and felt back in 1999 in the wake of the Columbine massacre. I remember the numbness. There was a desire to connect all the dots and answer all the unanswered questions, but that was an impossibility. Just like in 1999, my spinning and not-so-sorted-out and painfully-incomplete thoughts are front-and-center this morning. As a Christian, I believe that as followers of Jesus we can always do better in our response. Honestly, much of the criticism sent our way is well deserved. We do a poor job of following the Jesus we say we follow. I have no idea if what I’m trying to sort out as a matter of personal introspection will be helpful to you or not, but here goes. . .

On Saturday morning, I read David Brooks’ column in our local newspaper. It was titled, “Lets Have a Better Culture War.” As I re-read Brooks’ column this morning post-Orlando, I think he’s on to something when it comes to our lives in the public square. He writes, “The larger culture itself needs to be revived in four distinct ways: We need to be more communal in an age that’s overly individualistic; we need to be more morally minded in an age that’s overly utilitarian; we need to be more spiritually literate in an age that’s overly materialistic; and we need to be more emotionally intelligent in an age that is overly cognitive. . . If public life were truly infused with the sense that people have souls, we would educate young people to have vocations and not just careers. We would comfortably tell them that sex is a fusion of loving souls and not just a physical act. We’d celebrate marriage as a covenantal bond. We’d understand that citizenship is a covenant, too, and we have a duty to feel connected to those who disagree with us.”

I’m going to keep thinking about that as I pray for everyone in Orlando, for my self, and for our collective soul. Lord, help us figure this out. . . . and save us from ourselves.