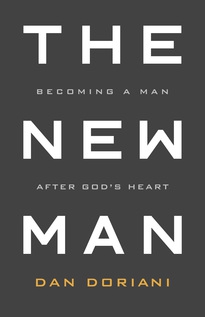 Last year one of my college friends, Dan Doriani, released a new book on being a man. Dan’s book, The New Man: Becoming A Man After God’s Heart, is one I’ve been reading carefully for my own personal enrichment. Dan’s goal was not to write the typical book for men that’s full of lists. Rather, he encourages us to be shaped by knowing God and His Word. It’s been a good, a challenging, and an encouraging read. It touches on everything from marriage, fatherhood, friendship, work, wealth, health, and play.

Throughout the book, Dan has inserted some pastoral thoughts (or what he calls “A word on. . .) on some of the more pressing cultural issues of the day. . . things like pornography, play, working too much, etc. I found Dan’s thoughts on same-sex marriage to be especially helpful. With Dan’s permission, I’m encouraging you to read the full text of his “Word on the Legal Status of Marriage in the West, ” which was penned well over a year ago. . . .

At the moment that I write this short essay, socially aware Christians are justifiably concerned about the legal and institutional status of marriage in the West. The focus of attention today is on same sex marriage. Throughout Western Europe and South America, several nations have decided to legalize same sex marriage or to recognize civil relationships so that same sex couples have the legal rights and privileges of marriage. In America and other federalist nations, the same shift occurs on a state-by-state basis. Courts increasingly argue that interference with same-sex marriage is a prejudicial assault on human dignity and a deprivation of human rights. This positions conservative Christians as foes of human rights, which is hardly a welcome development. There are several results. First, wherever we live, same-sex marriage either has come or is coming soon. Second, it will not be easy for Christians to gain a hearing for their position. Third, we now know, if we ever doubted it, that there are no Christian nations. In pluralistic democracies, leaders are beholden to the will of the people, not the will of God.

Christians have a variety of opinions about these developments. Many are pleased by the way rights have been extended to an often oppressed group. Whatever our view of marriage may be, we should know that the law of Moses often insists on equal legal protection for all (e.g. Exod. 23:8, Deut. 16:19, 21:15-17). On the other hand, Genesis states and Jesus reaffirms God’s good plan for marriage: “From the beginning the Creator made them male and female… For this reason a man will leave his father and mother and be united to his wife, and the two will become one flesh” (Matt. 19:4-5).

As always, we need to put current events in context. Specifically, Western nations have been falling away from biblical norms for decades. Divorce has become easier and easier, accelerated most notably by no-fault divorce laws that allowed either party to a marriage to terminate it at will (that is, regardless of the wishes of their spouse). Decades ago, easy divorce codified disregard for Jesus’ word, “What therefore God has joined together, let not man separate” (Matt. 19:6).

A few decades ago, cohabitation was rare, and widely considered shameful. The term for it, “shacking up,” suggested that it was a practice for the underclass. Today pre-marital cohabitation is typical. Studies have found that a period of cohabitation already preceded most first marriages by the mid-1990s. Today, that number is far higher. We now ignore another biblical norm. In America, the most recent studies report that 41% of all children are born outside of wedlock. In Great Britain, the number is 47%. These numbers are rising steadily and in almost every demographic group. Yet deliberately childless marriages are more common. Finally, there are ever more marriages with no sexual intimacy. This means that Western cultures have disregarded the created order – marriage, then sexual intimacy, then children. Today there is no strong link between sex and marriage, sex and procreation, or procreation and marriage.

The confusion about the order of cohabitation, marriage, sexual intimacy, and procreation will create additional challenges in coming years. For example, everything is in place for polygamy to become the next challenge to God’s design for marriage. Advocacy groups already make the case for polygamy and unofficial polygamy is on the rise. It will be all too easy to make a legal and  experiential argument for polygamy.

Legally: At the moment, polygamy is illegal in all Western nations, but enforcement is lax as officials increasingly tolerate unofficial polygamy among Muslims in France and Mormons in America. Reports say that Canadians leave their polygamists alone. If an official hauled the members of a local polygamist community into court, how (unless the accused chose to incriminate themselves) could they prove that the group is practicing polygamy? If society sees no essential connection between sleeping in the same bed and marriage, what evidence could be presented? Besides, if “male and female” is irrelevant to marriage, how can the number of participants become its one immutable feature?[1] Can anyone argue that a marriage between two men promotes the social good more than a marriage between one man and two women? Moreover, the so-called right to privacy assumes that governments have no legitimate interest and no right to intervene in private acts between consenting adults.[2] As a thought experiment, try to construct a principled argument (as opposed to an emotional or historical argument) against polygamy that doesn’t also condemn same-sex marriage. If we approve one, we must approve the other.

Experientially, people will say polygamy is loving and compassionate. “Yes,” they may concede, “Monogamy is ideal, but we hardly live in an ideal world. Many women long to marry but can’t find a suitable mate because men have no money, no character, no interest in marriage, or no interest in women. If a man can support several wives, financially and emotionally, how can anyone deny an interested woman the right to love, companionship, and children? Even if it isn’t ideal, we constantly accept things – like divorce – that are less than ideal. Besides, several of the world’s religions have accepted polygamy.”

So then, how do cohabitation, common divorce, same-sex marriage, births outside wedlock, and (one day) polygamy affect the cause of Christ and the gospel? In a vital way, nothing changes. Jesus is still Lord and Savior. As Christian ethicist Russell Moore said, the gospel doesn’t need family values to flourish: “Real faith often thrives when it is in sharp contrast to the cultures around it. That’s why the gospel rocketed out of the first-century from places such as Ephesus… Corinth and Rome.” The Roman Empire lacked a moral system that promoted healthy marriages. In fact, the very contrast between Christian marriages and the wreckage of pagan marriages, which included slave concubines, easy divorce, and sexual chaos strengthened the appeal of Christianity.

A nation’s authorities may permit, tolerate, or even promote marriage-like arrangements that fall short of God’s plan. But let us remember that those acts do not compromise our freedom to love our wives, husbands, and children. Courts permit many things that are contrary to biblical morality. Abortion is legal in most countries, but we can still have children. Legislatures promote gambling, since states expect to profit from it. But the state cannot drag us to casinos any more than Rome could force its people to attend gladiatorial shows.

For those who are prone to despair, consider the status of abortion today. Through persistence and courage, abortion has declined in many areas. In the 1980s, my state of Missouri had abortion rate that exceeded 20%. Today it is 8% and the rate is lower in several nearby states. Since the abortion rate remains as high as ever in some states (near 40% in New York), it seems that gentle persuasion can create a moral consensus.[3] Not long ago, this sort of progress in the protection of the unborn seemed impossible.

More importantly, social trends in no way restrict our freedom to marry, have children, and love each other. If anything, they should prompt us to rededicate ourselves to Christ-like love in marriage. The Christian marriage ideal attracted many pagans to the faith in the apostolic age. When the Reformers restored the biblical teaching on marriage 500 years ago, it enhanced the call to the gospel. When Reformers like Martin Luther married and became faithful husbands and fathers, their conduct beautified the gospel. May our marriages become a similar testimony to God’s purposes.

Jesus said, “From the beginning the Creator made them male and female.” We use this statement to promote God’s ideal and rightly so, but let’s remember that Jesus made that statement to correct an error of his age – arbitrary divorce. On that front, church conduct looks all too similar to the culture around us. How then shall we live?

First, we should tend our marriages and regard our spouse as God’s great gift. (Prov. 19:14). At its best, Paul says, the love of a Christian marriage reflects the love of Christ for the church (Eph. 5:25). Strong marriages adorn the gospel (Tit. 2:10). Waves of good marriages will make the case for God’s plan more effectively than any state or federal law.

This year I officiated at a wedding on the campus of a major American University that was founded on secular principles. At the reception, I sat next to a professor who did his doctoral work at that school and now teaches at another secular university in the same state. He said that the great majority of his fellow professors are secular. Nonetheless, he said they love their Christian students. On the whole, they are far more likely to come to class faithfully and well-prepared. They are willing to argue their convictions, they are active in campus life, they volunteer for worthwhile projects, and they keep their commitments.

The Christian faith has lost the home-field advantage in Western cultures. We have to accept reality as it is, not as we wish it to be. That means we will need to acknowledge legal marriages as the state does. As always, we are free to distinguish between a legal marriage and an ideal marriage, between marriage as humanity sees it and marriage as God intended it (Long ago, pastors distinguished between the being and the well-being of marriage.) That leaves us free to articulate, and, more importantly, to live out our concept of marriage. May we seek lives that are beautiful and words that are coherent and peaceful. That is the surest way to promote God’s good plan for salvation and a good life, one that includes God’s plan for marriage and family.

[2] Unofficial polygamy means there is one legal wife. Additional wives are not reported at the courthouse or claimed on tax returns, but the additional parties still take marriage vows before witnesses.

[3] These statistics are the most recent numbers from U.S. government web sites. We understand that trends may continue, accelerate, or reverse themselves and that abortifacient medications introduce uncertainty about the real abortion rate.