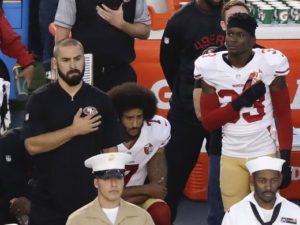 He certainly has people talking. And whether you like what Colin Kaepernick has been up to or not, I think that what he’s been up to is worth talking about. If nothing else, the 49er’s quarterback and one-hundred-fourteen-million-dollar man has provided us with a catalyst for what could be some good teachable moments with our kids.

I’m not in Kaepernick’s head so I’m not sure what all his reasoning is behind his actions, but the news media has picked up on two particular actions that have got everyone talking. First, he’s now sat out (or kneeled-out) the National Anthem two preseason games in a row. And second, his choice of socks during a few August preseason practices featured pigs wearing police hats.

Again, I don’t know what’s in Kaepernick’s head. Nor do I even begin to claim that I have a clear understanding of all the complexities of race issues in our country. Still, as I’m in the process of pondering what to make of Kaepernick’s strategy, I have some initial thoughts.

First, Colin Kaepernick is an American. As an American, he has the freedom and the right to say and do anything that is within the boundaries of the law. He can sit, stand, kneel, and wear or not wear socks as he sees fit.

Second, the great irony in this case and others is that oftentimes the protests are directed at the very institutions that have secured, maintained, and protected those freedoms.

Fourth, Colin Kaepernick is a role model. He has people’s attention because he is an NFL player and in the public eye. He is being watched 24/7 and his actions will come under scrutiny. It’s that way for anyone who chooses or finds themselves in the public eye. Consequently, Kaepernick and other role models have an even greater responsibility to self-monitor and think before acting/speaking. Like it or not, this is just the way it is. And with a host of young and vulnerable fans following Kaepernick, the responsibility is that much greater. Kaepernick’s socks send a message to kids about authority, respect for authority, and how to view authorities. 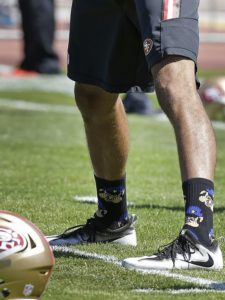 Fifth, words and actions should not communicate blanket statements about any people group. Kaepernick’s socks make a blanket statement about police officers. Granted, when we understand the nature of sin, we realize that no individual, community, system, or group is perfect. There will be horribly flawed rogue police officers who abuse their office in horrible ways. But not all police officers are like that. Likewise, it would be wrong to characterize all Christians, all whites, all blacks, all Latinos, all attorneys, all NFL players, or all (fill in the blank) anything as all-something, especially when that all-something is a negative caricature that results from the poor/immoral/reprehensible actions of a few.

Sixth, perhaps Kaepernick should think about more positive and constructive ways to communicate his message and work to bring about change. His actions make a big splash that results in headlines. But are those “big splashes” the best way to bring about change? Probably not. Kaepernick might in fact be alienating the very people who most- need to hear his concerns. Instead, conversation that builds bridges rather than walls might be a better approach. Kaepernick could leverage his celebrity and role-model status as an ambassador for causes that must be addressed. Sure, this might take some time, but I think it would be worth the patience and effort.

Finally, it will be interesting to see what, if anything, the NFL does with this. If the NFL tightens the reigns on player behavior in terms of expectations and standards (which any employer should be doing), then Kaepernick has a responsibility to respect and obey those standards. . . as long as those standards don’t require him to do anything ethically or morally wrong. If he chooses not to respect and obey the standards of his employer, then he should either voluntarily move on, or expect to face discipline or lose his job.

So there it is. . . some ramblings as I continue to process this unfolding story. What have I missed?