The older I get, the more I see how important it is for me to put that stake in the ground. Then, I need to use that stake to tether me to God’s Word in ways that will hold me secure in the midst of both the storms of life and the winds of change that whistle all around us through the compelling voices of culture.

Difficulties and suffering can rattle us. I’ve seen too many people be moved from a posture of trusting God to blaming God. But I’ve also seen the hope-filled joy that grows in those who though blown all over the place by the tough realities of life, remain firm and even advance in their commitments to God’s Word.

And then there’s the culture. The “Spirit of the Times” sure can take hold of our hearts and minds, can’t it?!? Paul called this “following the course of this world” (Ephesians 2:2). I don’t want to wander that dangerous course either.

I’m concerned that if we aren’t careful, mindful, and watchful, we might allow ourselves to loosen up and even let go of the truths that anchor us in our faith. 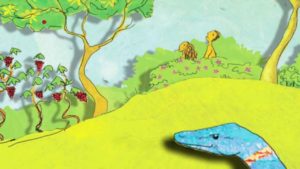 In her Jesus Storybook Bible, Sally Lloyd-Jones tells the story of Genesis 3 under the title, “The Terrible Lie.” She writes, “Satan was seething with anger and looking for a way to hurt God. He wanted to stop God’s plan, stop this love story, right there. So he disguised himself as a snake and waited in the garden.” We know what happened from there.

And he’s still disguising himself in an effort to charm us away from our first love and into believing lies.

Youth workers. . . I’m concerned for us. If we follow the lies we will be teaching our kids the lies.

Way in back in 1652, a man named Thomas Brooks knew that the snake was about the work of charming folks into darkness. He wrote an amazing book, Precious Remedies Against Satan’s Devices. Over 350 years later, the book is still relevant in its overview of Satan’s schemes. Why? Because we continue to fall for the same things over and over and over again.

The book’s opening section lists and explains twelve schemes (devices) Satan uses to pull the soul into sin. Check out #11. . .

DEVICE 11: By polluting and defiling the souls and judgments of men with such dangerous errors, which in their proper tendency tend to carry the souls of men to all looseness and wickedness, as woeful experience does abundantly evidence. Ah, how many are there filled with these and suchlike Christ-dishonoring and soul undoing opinions, that is—that the Scriptures are full of fallacies and uncertainties, and no further to be heeded, than they agree with their own carnal thoughts; that it is a poor, low thing, if not idolatry too, to worship God in a Mediator; that the resurrection is already past; that there was never any such man or person as Jesus Christ—but that all is an allegory; that there is no God nor devil, heaven nor hell—but what is within us; that sin and grace are equally good—with a hundred other horrid opinions, which have caused wickedness to break in as a flood among us.